Karnataka chief minister, Basavaraj Bommai on Sunday sought to assuage concerns over the bill against religious conversion proposed by his government,saying that the legislation aims to prevent only those cases in which a person is offered something in exchange of converting to another religion

People need not worry about the proposed Anti-Conversion Bill,Chief Minister,Basavaraj Bommai said speaking to media persons In Hubballi on Sunday.

Hinduism,Christianity,Islam and Sikhism are constitutionally recognised religions.There would be no hindrance for worship and religious practices of people belonging to any religion,Bommai assured.

The bill is only to prevent religious conversions by inducements,”he clarified.

The issue of religious conversions is being debated for a long time in the post-independence era. Many states have enacted anti-conversion laws.

Majority of people want similar law to be brought in the state after studying the laws enacted in other states.

In this background the Law department is studying the laws enacted in other states. Then the draft would be placed before the state cabinet.

If the Law department submits the draft then it would come up for discussion in Belagavi session of state legislature,” Bommai said.

Religious conversions is not good for society.The poor and vulnerable sections of the society should not fall for it.Conversions bring problems within the families.So,the bill is being proposed, he said.

The chief minister also gave examples of other states, such as Madhya Pradesh, Uttar Pradesh and Gujarat, where such laws have already been enacted. Each of the three states, like Karnataka, has a BJP government.

Bommai then claimed that the majority of people in Karnataka,too,want such rules to be brought in. “Therefore, in this background, the law department is studying laws from other states.

The draft would then be placed before the state cabinet.If the law department submits the draft, it would be taken up for discussion in the winter session of the legislature,he remarked.

In April this year,Gujarat became the third state after MP and UP to make a law against what it described as ‘forced religious conversions.’ However, in August, the Gujarat high court ordered an interim stay on the Freedom of Religion Act, 2021.

There is no need for people to worry,the Bharatiya Janata Party (BJP) leaders assured,speaking to media a day before the scheduled commencement of the winter session of the Karnataka legislative assembly.

Karnataka Panchayat Raj and Rural Development Minister, K S Eshwarappa had recently said that the government was planning to introduce the anti-conversion Bill in a bid “to preserve and protect” Indian culture.

In whatever form the Government introduces the Bill, we will oppose it,Karnataka Pradesh Congress Committee president D K Shivakumar said.

He added,The government is attempting to undermine the contributions of the Christian community in education and other fields by proposing this (anti-conversion) law.This is being done by the party with an eye on the 2023 Assembly polls.

Shivakumar further explained that the anti-conversion Bill would come in the way of attracting investment and development of the state.

Opposing the Karnataka government’s announcement of the formulation of the anti-conversion bill, the Archbishop of Bengaluru Reverend Peter Machado wrote to Karnataka Chief Minister Basavaraj Bommai expressing his strong reservation against the proposed legislation on Friday.

In the letter, the Archbishop expressed that the anti-conversion bill is discriminatory and arbitrary, and opined that the law will empower the fringe elements in the state to create lawlessness and harm the state’s peace and unity.

Writing on the behalf of the entire Christian community in Karnataka,he stated that there is no need to create a new law,when sufficient laws and court directives are in place to monitor any aberration of the existing law.

Apart from this, the Archbishop also spoke against the government’s decision on conducting a survey of both official and non-official Christian Missionaries functioning in the State.

He opposed the decision and said that there is no need to conduct a survey when the government already has the data collected during the census. 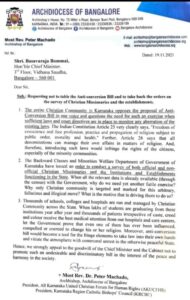 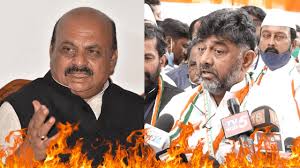 only Christian missionaries were being targeted specifically in the census” Calling the decision discriminatory, he said that such actions will affect the social harmony of the state.