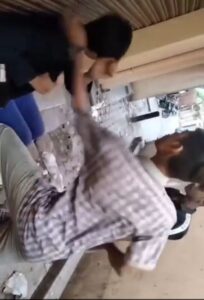 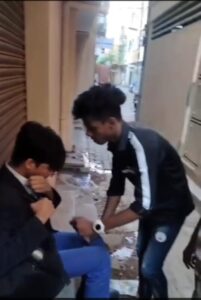 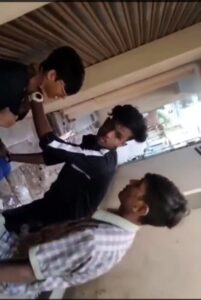 he Cottonpet police on Tuesday arrested an 18-year-old high high school student who along with his friend assaulted and robbed a school boy of another school on Thursday.

Senior officer told reporters as the video of school student being assaulted by two persons went viral the Cottonpet police inspector, Balraj and his team swung into action and based on the video evidence and other technical inputs the team tracked the duo.

After apprehending it was found that one of the accused recorded the incident on his mobile and circulated it among others,which finally reached the school principal of the victim.

Based on the complaint filed by school principal T Vishwanath,the cottonpet police swung into action and arrested the accused while the accused who is a juvenile aged 16 years and school drop out,has also been booked.

Probe revealed that the accused and the victim are from the same area studying in different schools.The victim had a fight with the sixth standard student belonging to the accused school and assaulted him and snatched Rs.100 over a trivial row .

The boy complained to the accused who is his senior in the school went around in search of the victim and found him sitting near a tea shop in one of the by-lanes of Cottonpet.

The accused assaulted the victim carrying knife in his hand and hurting him and searched the pocket of the victim for money and we have recovered a knife,which the accused reportedly carrying in his pocket .

The accused assaulted the victim and even asked his friend to record the video.Initially the police found that the accused boy had turned 18 years hardly a month ago.

Finally Bengaluru Police Commissioner,CH Pratap Reddy has appreciated Addl CP West,Sandeep Patil, DCP West,Laxman B Nimbargi,ACP, KC Giri,PI,Balraj and his whole team for their excellent work in nabbing the duo including a student and school dropout and for the exemplary and meticulous investigation done by them a suitable reward will be given to whole team for their timely action he added.