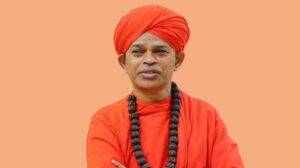 he chief pontiff of Sri Murugha Mutt,Seer Shivamurthy Murugha Sharanaru,accused of sexually assaulting minors,was arrested on Thursday evening.He was earlier taken to undisclosed location and is being questioning.

Six days after pocso case registered against him, the Chitradurga police on Thursday night arrested murghashri seer amidst tight security..

Senior officer told reporters,He was escorted to an undisclosed location soon after the arrest for questioning and will be subjected to medical test and later in the late midnight we will produce him before magistrate at his house for further investigations.

The police earlier arrested the hostel warden rashmi who has been accused of abetting the crime’.

High alert sounded at Chitradurga town soon after the arrest.

The DySp anil kumar who is an IO in the case will be questioning the seer.

Reacting to the arrest,Odanadi NGO head parashu said that justice was delayed though not denied.

Why did the police took so long to arrest him he questioned adding that seer is beast in the garb of hermit .

Earlier the seer had applied for anticipatory bail which was postponed by the court to next date of hearing.

The police later in the evening heightened the security in and around the ashram before arresting the accused..

The minor victims have accused the seer of sexually harassing them for many years,before they escaped to Bengaluru and later to Mysuru.

The odanadi,NGO head parashu accused that there are many victims in the ashram who are suffering such harassment silently and they expect justice too.

A case of rape and kidnapping was registered against Lingayat seer Shivamurthy Murugha Sharanaru on August 26 under the Protection of Children from Sexual Offences Act 2012 for allegedly sexually assaulting minors in Karnataka.

However, the seer has denied the allegations and blamed the former administrator of Karnataka’s Muruga mutt, SK Basavarajan, and his wife for conspiring against him.

The Seer was subjected to Medical check up as test after arrest a procedure and later was brought to 1st session court magistrate house and was produced before Magistrate at 2:50am in the midnight before the Justice Komala and sent to judicial custody.