The Railway Protection Force (RPF) Shakti team in the history has made one of the largest seizures and caught a 44-year-old man from Odisha at Yeshwanthpur railway station on Friday carrying methamphetamine (crystal meth) worth Rs.3.2 Crore in his backpack.

The total weight of the consignment was 640 grams,and is one of the largest seizures of crystal meth made by the RPF in the recent past.

Senior RPF officer said,that RPF was recently empowered under NDPS act and since then RPF Bengaluru has been on lookout for any contraband or banned substances being illegally trafficked through trains and had alerted all special teams conducting raids to look out for such.

On 01st October during raids conducted by the all women RPF Shakti teams formed exclusively for enhancing women security headed by Ms.Tanuja N.P.,ASI,a suspected person was seen avoiding the team and moving rapidly in a opposite direction on board Prashanti express.

Ms.Tanuja by her presence of mind,immediately analyzed the body language as suspicious and alerted other team mates who were in other coaches and alerted them to trainagulate on the suspect after the train stops at the next station Hindupur all the while keeping a distance and watching.

The moment train stopped at Hindupur the accused tried to flee and since he was surrounded from all directions and tactfully chased and stopped,he surrendered for questioning and confessed to carrying banned psychotropic substances.

He was brought to RPF Post Yeswanthpur where in presence of Assistant Security Commissioner, Shri Shamnath and Inspector,Yeswanthpur,A K Tiwari,he revealed he was carrying Crystal Meth ( Methamphetamine) worth 3.2 crores and weighing 640 grams.

Proper procedure under NDPS Act was followed and he is being handed over to GRP for further legal action.

The accused is a peddler who is part of an inter-State racket.He was booked under the Narcotic Drugs and Psychotropic Substances Act, and taken in police custody,” said a senior police officer and further investigation is on.

The detained persons and seized liquor bottles were handed over to excise department as per procedure he added.

Finally Senior Divisional Security Commissioner,Debashmita Chattopadhyay Banerjee has appreciated,Assistant Security Commissioner,Shamnath,Inspector,AK Tiwari,ASI,Tanuja NP and other staff who has successfully nabbed the inter-state drug trafficker and seized huge haul of narcotics drugs from his possession a suitable reward will be given to the whole team he added. 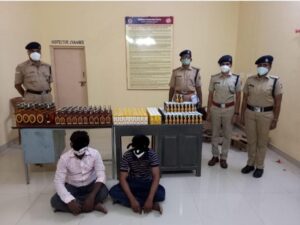