The Department of Revenue is making all the preparations for the payment of input subsidy for crop loss happened during July and first week of August months and it will be disbursed within ten days,said Chief Minister Basavaraj Bommai said.

Addressing a news conference after visiting flood-hit areas in Ramanagar and Channapatna taluks on Monday,he said the work of joint survey and other documents of crop loss are being uploaded.

A report on crop damage in the last three days has been asked.As per the Government of India guidelines, the crop damage compensation is paid more than two times.

Last year,over Rs 1100 crore additional compensation for the crops damaged on 14 lakh hectares in just one and a half months.

A similar pattern will be formed this time and compensation will be given within five or six weeks.

In the wake of loss of house-hold articles, reeling factory and silk storage in Ramanagar City,the CM said a survey is ordered.

After the survey report, it will be considered as a special case and disburse compensation though it is not in NDRF guidelines.

Bommai said heavy rains in the last three days has resulted in floods in 16 districts.Flood water has entered houses and residential localities.

Details of prevailing situation in those districts have been collected from the deputy commissioners through a video conferencing held on Sunday.

Since bengaluru-Mysuru Highway is waterlogged at several places, the SPs of Mysuru Mandya and Ramanagar districts have been asked to allow vehicles on alternative routes.

Instructions are given to districts administrations to give a contingency relief of Rs.10000 for the house damage.

The house damage are categorised as A,B,C.The completely collapsed houses will be paid Rs 5 lakh, Rs 3 lakh for partially damaged house and Rs 50,000 for little damaged houses.It is paid as per the Government of India guidelines.

Besides,459 sheeps and goats,5500 chicken too have died.The agricultural crops are damaged on 600 acres and horticultural crops on 500 acres. More details are available after the survey, he added.

He said water has entered into over 50 houses and huts of SC/ST in Gandhi Grama and they will be evicted to build the pucca houses for them.

Instruction has been given to deputy commissioner in this regard.Several bridges and water bodies 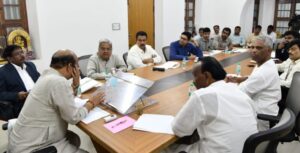 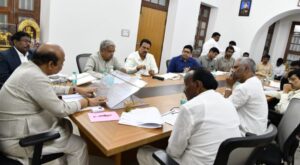 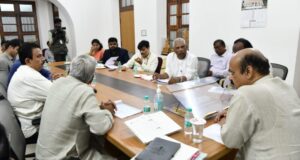 are damaged in Magadi taluk.

The bunds are built temporarily to prevent outflow of water from tanks.A big tank has overflowed in Channapatna and entered houses.

The affected families will be given compensation.
The CM observed that areas on both sides of Bengaluru-Mysuru Express Corridor Highway have faced problems due to heavy rain.

Some have alleged unscientific works by NHAI are the main reasons for the havoc on highway. But the NHAI engineers have designed this express highway after studying the rainfall of last ten years.

The UGD must be wide to carry load.This problem has cropped up in Mandya, Ramanagar and Channapatna.

I will discuss with NHAI and ask them to re-design for free flow of water without accumulating on highway.

Union Surface Transport Minister Nitin Gadkari is expected to visit the State soon and he will be apprised about this problem.