The CCB officials on thursday busted an inter state mobile snatching racket and arrested two persons who are part of the eight members gang . 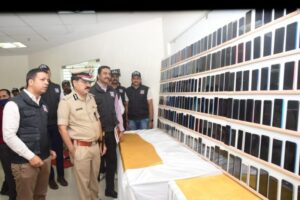 and his associate Ajaz,40, from Shivajinagar.

A team headed by PI,Hazrath Killedhar and his team swung into action the team collected information from the victim and collected all details from the various police stations and conducted a operation secretly and with the help of technical inputs and police investigation skills the team identified the accused identity.

Based on reliable inputs the team zeroed in on two persons who are part of eight member Notorious robbery gang.

They revealed that they used to rob mobile phones from people in and around the city and sell the robbed phones in Mumbai,Hyderabad and Delhi through their contacts .

The accused are habitual offenders involved in several robbery cases and arrested.But after coming out on bail,the accused continue to rob phones and sell it in the markets of other metro cities.

The team grilled the duo who spilled the beans and based on their statement the team went to different parts of the state and recovered 512 smart phones worth Rs.78.8 lakh from them we are on the lookout for other members of the gang and special team has been constituted under the leadership and able guidance of Dr SD Sharanappa DCP Crime-1.