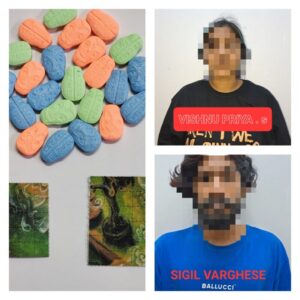 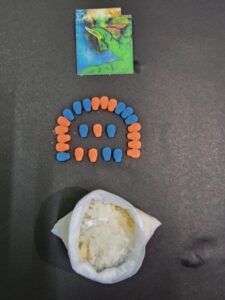 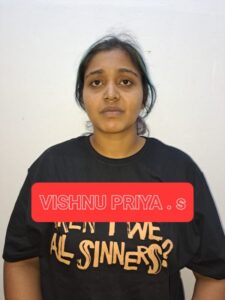 he 22-year-old a Kerala based tattoo artiste turned drug peddler arrested by CCB wanted to be like his role model Pablo Escobar,a columbian drug lord and operate like him in Bengaluru,the CCB officials said .

The drugs include 100 grams of MDMA crystals , 150 LSD strips,25 Ecstasy tablets,a diary contaning info about the drug business and contact list and a poster of Pablo Escobar.

The accused Sigil Varghese from Kottayam in Kerala and his life in partner Vishnupriya from Coimbatore in Tamilnadu,are tattoo artists by profession,were first arrested by Hulimavu police in March and recovered 13 kgs of Hashish oil worth Seven crores .

Two months later the duo came out on bail and continue to peddle drugs before they are caught red handed by CCB officials in Parappana Agarahara in November this year.

Upon Questioning about the Pablo’s poster,Sigil confessed that Pablo is his role model and was practicing his style of peddling drugs .

Explaining his Modus Operandi,Sigil told the police that he followed “ faceless Russian treasure hunt” method while delivering drugs which is Pablo and gang would practice .

Sigil said that he would clinch the deal with his customers over phone and never meet them in person.After taking the order and getting the money online,he would place the drugs under the pole or a bark of the tree or in a dustbin,and send video clip along with the location details to his customer.

The CCB are now probing the source and the network through the diary they ave recovered from him.

Finally Bengaluru Police Commissioner,CH Pratap Reddy,has appreciated Joint CP Crime,Dr SD Sharanappa,DCP Crime-1,Yathish Chandra GH,ACP,Smt.Reena Suvarna,PI,Hazaresh Khilladhar,Smt.Durga and other staff has been appreciated for their excellent work and meticulous investigation done by them in nabbing the duo and a suitable reward will be given to whole team he added.