Home / State / Tonight, Kolkata will not sleep as Argentina gear up to take on Poland in the FIFA World Cup

Abhijit Ray, Kolkata:As Argentina gear up to take on Poland in the FIFA World Cup Thursday, fans of the Latin American nation here at Kolkata will have a sleepless night. 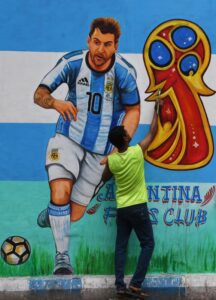 Known for Kolkata’s unwavering loyalty and devotion to Argentina, Maradona and Messi, today again the Thecity of joy Kolkata is now becoming Buenos Aires, the capital of Argentina. There is one common thread to all Argentina fans in Bengal. The 1986 World Cup, which was aired live on national TV channel, turned most of the Kolkatans into ‘Maradona devotees. Messi is an extension of Maradona, the football’s global hero. Lionel Messi will play perhaps the most important match in the national team jersey on Thursday. The match against Poland is do or die for Messi. Numerical calculations say, even if there is a draw, there is a possibility of getting to the knockouts of the World Cup. But in that case, the condition, Saudi Arabia’s win against Mexico in the other group match will not work. That’s the end of Messi’s cup-dream! If that match is a draw or if Mexico wins, even if they draw with Poland, Argentina will reach the last sixteen.However, the entire Argentina camp is desperate to get to the next round without calculating any more numbers and they are confident defeating Poland. But the task is not easy. Because Poland is also doing well in the race for the last sixteen. Robert Leonidsky will enter the field on Wednesday from the top of the group with 4 points in 2 matches. If they win, they will reach next group.  Even with a draw, the Poles still have a chance. But for fulfilling that condition, the Saudis should not winanother match! As a result, it doesn’t take a rocket scientist to predict the ground that the Poland team will desperately jump into.Realizing the importance of the match, the image of the Argentina camp has suddenly changed. The euphoric mood that found the footballers after the win against Mexico disappeared overnight. But good news for Argentina fans, Messi is in good spirits. Experts are again marking this match as the stage for Messi-Leonodsky duel. Where Messi has already scored two goals, Leonidsky ended his World Cup goal drought in the previous match. Leva has beaten Messi more than once in club football. But this time the two will face each other wearing the jersey of the national team. And in this fight, Argentina is at least a few years ahead of Poland. At least on paper!  Earlier, at Copa America tournament, the entire India celebrated in Kolkata as Argentina won in Brazil.Referring to them as we, some 15,000 km from where Lionel Messi held aloft the Copa America trophy, Kolkatans lapped up his jinx-breaking triumph with Argentina, a much-loved team that doesn’t know of their existence, their fandom.