Strong observations on absence of law or regulations come close on the heels of criticism by the government of the top court’s own model of selecting judges for constitutional courts. 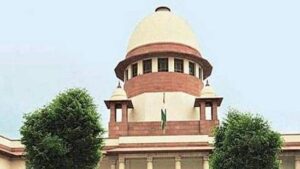 Successive governments have ‘completely destroyed’ the independence of the Election Commission of India (ECI) by ensuring no chief election commissioner (CEC) gets the full six-year term to head the poll body since 1996, a Constitution bench in the Supreme Court lamented Tuesday, adding the absence of a law for appointment of election commissioners (ECs) has resulted in an ‘alarming trend’.

The five-judge bench further remarked that the silence of the Constitution on how to pick CEC and election commissioners (ECs) has been exploited by political parties of all colours, giving rise to concerns if those appointed are expected to do the bidding of the dispensation at the relevant time.

“It’s a very, very disturbing trend. After TN Seshan (who was CEC for six years between 1990 and 1996), the slide began when no person has been given a full term. What the government has been doing is that because it knows the date of birth, it ensures that anyone who is appointed as the CEC does not get his full six years… Be it the UPA (Congress-led United Progressive Alliance) government or this government, this has been a trend,” said the bench led by justice KM Joseph.

It added: “In this way, the so-called independence, which is just lip-service, is completely destroyed… Particularly in view of the disturbing trend we have found… nobody can question them since there is no check. This is how the silences of the Constitution can be exploited. There is no law, no check. Everyone has used it to their interest… Pick up someone and give him a highly truncated tenure. He is obligated; does your bidding… we are not saying so but it looks like that.”

The top court’s strong observations on the absence of a law or regulations have come close on the heels of criticism by the government of the apex court’s own model of selecting judges for constitutional courts.

Earlier this month, Union law minister Kiren Rijiju commented that the Supreme Court collegium appoints people who are known to the judges and appear before them. At different occasions in the last one month, Rijiju has termed the collegium system ‘opaque’, and described the Indian selection system as the only one where judges appoint judges.

Appointment of EC Arun Goel: AG asks SC to “hold its mouth”, requests it to look into matter in entirety

SC added:so-called independence which is just lip-service, is completely destroyed.

In response to Centre’s argument that there wasn’t need for SC to interfere with appointment process,

FYI:Parliament has no law framed to appoint ECs despite mandate of Article 324(2). CECs continue to be appointed by PM & council under President’s seal.

0n Nov 17, IAS Arun Goel was given voluntary retirement.48hrs later he was made an EC. SC has asked for his appointment file.

As the Union government argued on Tuesday that there was no need for the court to interfere since the appointment process has worked well, the bench asked: “It is due to obdurate nature and obstinacy of the ruling political party, whichever colour it may be, that it will not want to let go of the present structure where they have a free hand. This is self-serving and they won’t want to let go of it… Each party that comes to power will want to hold on to it. Now, the question is when purity and fairness of elections are intertwined with democracy, should the court remain silent?”

The bench, which also included justices Ajay Rastogi, Aniruddha Bose, Hrishikesh Roy and CT Ravikumar, said that despite a positive mandate under Article 324(2) and recommendations made by Dinesh Goswami Committee in 1990 to usher in greater independence for ECI, Parliament has not acted on framing a legislation.

At present, ECI is a three-member body, with a CEC and two ECs. Under Article 324(2) of the Constitution, the President is empowered to appoint the CEC and ECs. This provision further stipulates that the President, who acts on the aid and advice of the Prime Minister and the council of ministers, will make the appointments ‘subject to the provisions of any law made in that behalf by Parliament’.

However, with no such law having been framed till date, CEC and ECs are appointed by the Prime Minister and the council of ministers under the seal of the President. The rules for such appointments are also silent on the qualification of a candidate.

A batch of four public interest litigations (PILs) pressed for issuance of directives to the Centre for setting up a neutral and independent selection panel for recommending names to the President for appointments as CEC and ECs.

Senior counsel Gopal Sankaranarayanan, and advocates Prashant Bhushan and Kaleeswaram Raj appeared for the petitioners, who have argued that the independence of the poll body could be ensured by way of having a completely neutral selection panel so that ECI is totally free from political and executive interference.

Criticising the government for not coming up with a law despite a positive mandate under Article 342(2), the petitioners proposed last week that the top court could direct a selection panel on the lines of the Central Bureau of Investigation (CBI) wherein the panel comprises the Prime Minister, the Chief Justice of India, and the leader of the single largest party in the Opposition.

Under the 1991 Election Commission (Conditions of Service of Election Commissioners and Transaction of Business) Act, CEC and ECs shall hold office for a term of six years or till they are 65, whichever is earlier. At one point during the day-long hearing on Tuesday, the bench cited the presence of the CJI in the selection panel for the CBI director. “The very presence of CJI is a message that you can’t play games,” it commented.

Attorney general R Venkataramani, representing the Centre, sought to persuade the bench that the constitutional provision does not cast an indispensable mandate on Parliament to frame a law, and nor has the situation become such that a judicial interference is required to regulate appointment of CEC and ECs. He argued that the court may have to intervene only in situations where the aberrations in the selection are patently destructive of the independence of ECI or fundamental rights of the citizens are getting impacted.

But the Constitution bench remained firm.

“You will have to take some steps. When you yourself felt the need to set up the committee but you haven’t done anything in the last three decades, should the court remain silent? If there is a room for making a law, then how long you can argue that you will not. We are taking this up after 70 years. Till how long will you continue? Something has to be corrected somewhere… Situation on the ground is fairly alarming,” observed the bench.

“You look at the position of CEC and ECs. The word ‘superintendence’ connotes reservoir of power, authority and duties that have been put on fragile shoulders of three men… What’s important is to put a system in place. In any given number of situations, the character of a man is of utmost importance — ‘I won’t allow anybody to bulldoze me. Whether it’s the Prime Minister or anybody else, I don’t care about it.’ We want someone like him. So, how do we get the man appointed? That’s why the process of appointment becomes crucial,” it emphasised.

The court, while adjourning the case for Wednesday, added: “How to select the best is the question. There has to be a transparent mechanism… If you are not moving forward even after several decades, can you argue the court can still not say anything?… We know these cannot be a matter of simplistic solution but that alone can’t be a reason not to wade through the complex web of provisions and principles to finally find the light if we can.”

It also requested the AG, who will continue his arguments on Wednesday, to answer categorically if there is a process that the government follows in appointing CEC or EC. “Or, inform us if you always use your wisdom and there is no process,” it said.