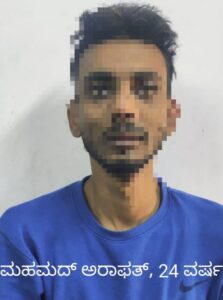 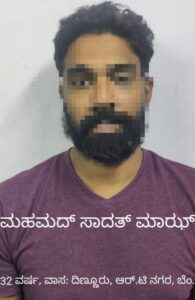 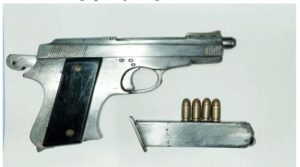 he Central Crime Branch officials on tuesday arrested a Rowdy-Sheeter and his associate while he was trying to sell a country made pistol with four rounds of ammunition to another rowdy.

Based on a credible information,the CCB officials rushed to RT Nagar and pin down Mohammed Arafath and his associate Sadath Maaz before they could deliver the weapon to their client.

A detailed probe revealed that Arafath had sourced the weapon from his contacts in Mumbai and trying to sell it to his clients for a higher price .

The CCB police are now on the lookout for rowdy who had ordered the weapon and to ascertain the reason for buying the weapon .

Both Arafath and Saad have been booked under Arms Act and further investigating to ascertain whether Arafath had sold the weapons earlier .

In July 2022,the Hebbal police arrested two labourers from Bihar and recovered country-made gun and six rounds of live ammunition,which they were planning to sell .

In September 2022,the DJ Halli police arrested Praful Gnyaneshwar Gawande,24,from Nagpur while trying to sell three country-made pistols and nine bullets to a rowdy based out in wilson garden .

In April, 2021: The CCB police arrested Mukesh Chopra,22,from Jodhpur was arrested from Akshaya Nagar near Hulimavu .

in June 2021,the Organised Crime wing of the CCB on Saturday arrested a 38 year old gun runner and two of his associates who were supplying country-made weapons to the city based gangsters.The team has seized three country made pistols and 15 rounds of ammunition from them.

Finally Bengaluru Police Commissioner,CH Pratap Reddy,has appreciated Joint CP Crime,Raman Gupta,DCP Crime-1,Dr SD Sharanappa,DCP Crime-2,Yathish Chandra,and whole team of Organised Crime wing officers and staff who has done a meticulous investigation in nabbing the Rowdy sheeter who was gun runner in city a suitable reward will be given to whole team he added.