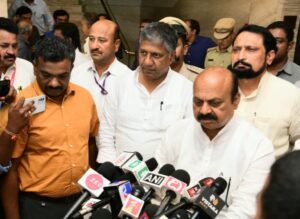 Talking to reporters here on Monday, he said the Britishers ruled India for over 200 years and they would have never expected such a big development.

The wheel of fortune has turned completely, he opined.

Bommai said the state government has fulfilled the 50 year dream of SC/ST communities which had demanded a hike in reservation.

An ordinance has been promulgated on the basis of recommendation of Justice Nagamohan Das Commission, and it will be approved in the next session of the State Legislature.

After the approval in the State Legislature, the same will be forwarded to the Union Government to include it in Schedule 9 of the Constitution.

When told that he has done what Siddaramaiah failed to do as the AHINDA leader,Bommai said he works on his thinking and discharging duty as the CM.