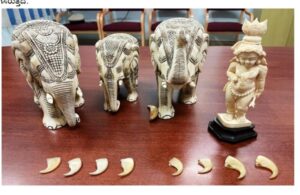 The Hanumanthnagar police arrested a 50-year-old man from Denkanikote while he was trying to sell two elephant tusks to people on Ramanjaneya road on Tuesday.

The accused Kaliyappan,though told the police that he is part of the poachers gang brought the tusks to city to sell,the police found a Fores department sticker on the motorcycle he was riding .

inquires revealed that Kaliyappa confessed that the bike belonged to his son who worked in forest department Hosur range,which was confirmed by the police.

The police are now probing the possible involvement of his son and suspected that the tusks must have been stolen from one of the store rooms of forest where the wildlife artifacts are stored .

It may be recalled that the Malur police four years ago arrested a fire watcher from Kuppam in AP, while he was trying to sell the tusks after he stole it from the store room of the forest department .

Kaliyappan has been booked under various sections of wildlife protection act for further investigations.

Earlier the police arrested a 39-year-old advocate from Hosakote along with two of his associate for trying to sell a leopard skin .

The trio was caught red handed while they were waiting for the customers on service road in Srinagar .

The accused have been identified as Muneer Basha,J,a practicing advocate from Hosakote , Srinivasa Rao,54 from Ballary and Syed Akbar, 50 from Mulabagilu.

Investigations revealed that the Akbar has sourced the skin from his source and approached Muneer Basha to sell and make money offering him the share .

Basha readily agreed and tried to contact buyers and was caught while handing over the pelt. The accused have been taken into custody to ascertain the actual source of the skin.

In a similar incident, the police have arrested a 47-year-old man and seized four figurines including three elephants and krishna idol made from ivory along with a tiger teeth and eight nails from him.

The accused identified as Dinesh Seshagiri Seth, a resident of Hanumantha Nagar was caught red handed at Maruthi circle while he was moving around jewelry shops suspiciously.

Police suspect that Dinesh was planning to sell them to the jewellers who are one of the prospective clients for the wildlife artifacts as they are in great demand.

Recently Kannada film star Darshan who is also wildlife enthusiast and brand ambassador of the Karnataka Forest and Agriculture departments,has seen flaunting his tiger nail gold necklace during his visit to a temple recently.

The forest department took cognizance of this and stepped up vigil to monitor jewelers and gold smiths using body parts of the wild animals illegally in the jewels.

The forest department has earlier written letter to the jewelers association informing them to keep away from such practice and warned legal action as per the wildlife Protection Act.