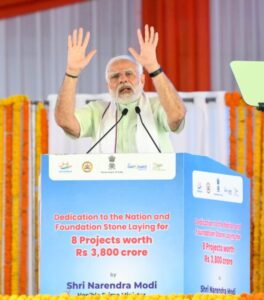 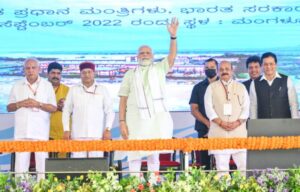 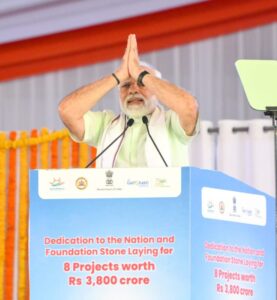 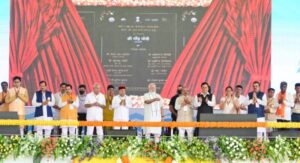 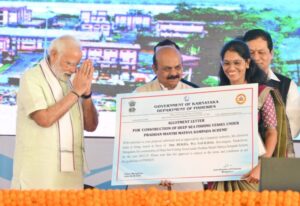 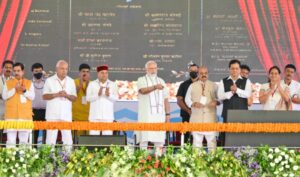 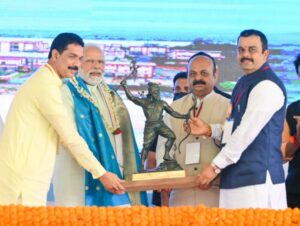 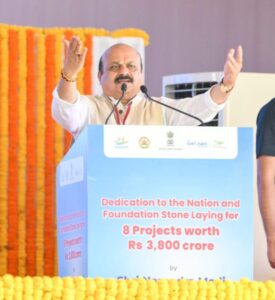 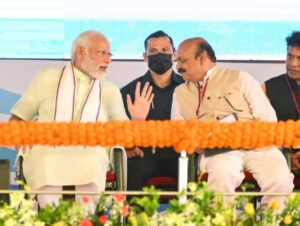 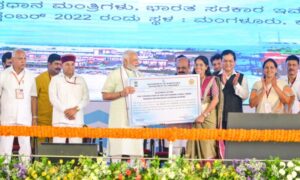 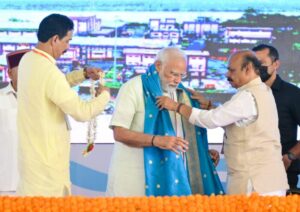 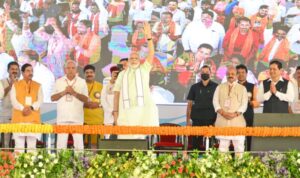 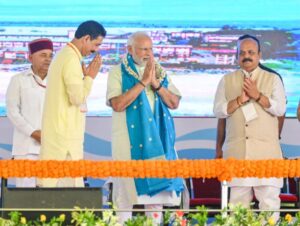 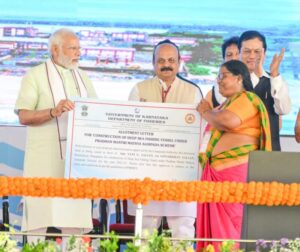 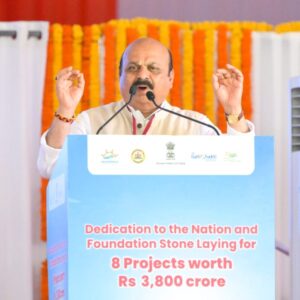 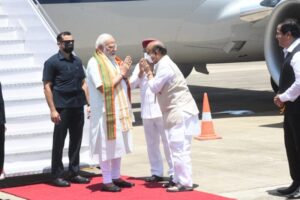 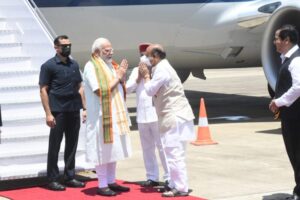 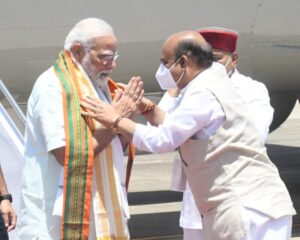 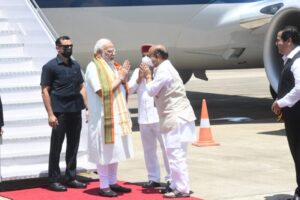 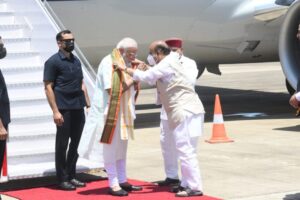 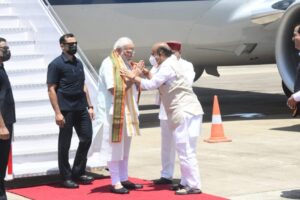 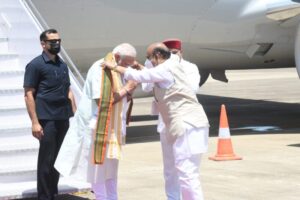 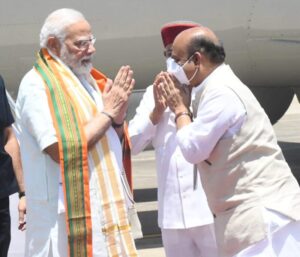 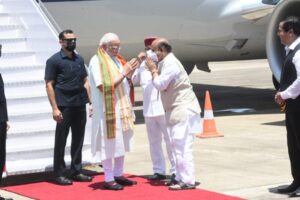 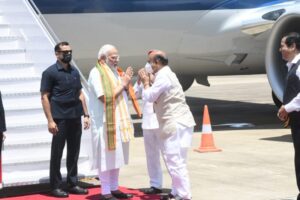 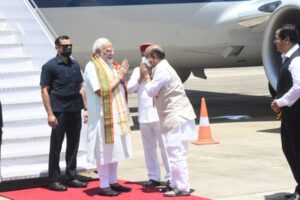 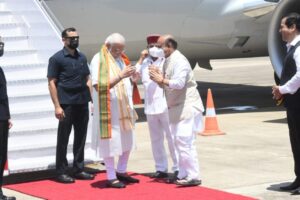 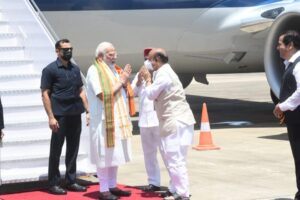 M inaugurates and lays the foundation stone of development projects worth around Rs 3800 crores in Mangaluru.

“To build a developed India, it is very necessary to expand ‘Make in India’ and the manufacturing sector of the country”.

“Karnataka is one of the biggest beneficiaries of Sagarmala scheme”.

“Piped water has reached more than 30 lakh, rural families of Karnataka, for the first time”.

“More than 30 lakh patients of Karnataka have also got the benefit of Ayushman Bharat”.

“Today digital payments are at a historic level and our innovations like BHIM-UPI are grabbing the attention of the world”.

“Gram panchayats are being connected by laying about 6 lakh km of optical fiber”.

“Under PM Gatishakti National Master Plan, more than two hundred and fifty projects of railways and roads have been identified which will help in seamless port connectivity”.

The Prime Minister,Narendra Modi inaugurated and laid the foundation stone of mechanization and industrialisation projects worth around Rs.3800 crores in Mangaluru today.

Addressing the gathering,the Prime Minister said that today is a red letter day in the history of India.Be it territorial security or economic security,India is witnessing huge opportunities.

Recalling the commissioning of INS Vikrant earlier today, the Prime Minister exuded the pride that every Indian is experiencing.

Referring to the projects for which were inaugurated or foundation stones were laid,the Prime Minister said that these projects will increase the ease of living and employment in Karnataka especially,One District and One Product’ scheme will facilitate the availability of market for the products of fishermen,artisans and farmers of the region.

Remarking on the five vows (Panch Pran),the Prime Minister said that the first of the five vows that he had talked about from the Red Fort is the creation of a developed India.

The Prime Minister said, “To build a developed India, it is very necessary to expand the manufacturing sector of the country, ‘Make in India’.”

Highlighting the efforts that the country has made toward port-led development,the Prime Minister emphasised that it is an important mantra for development.

As a result of such efforts, the capacity of India’s ports has almost doubled in just 8 years.

Remarking on the prioritised infrastructure development in the last 8 years,the Prime Minister said that it is Karnataka that has benefited immensely from it.

Karnataka is one of the biggest beneficiaries of the Sagarmala scheme,the Prime Minister added.

Highway Projects worth 70 thousand crore rupees have been added in the last 8 years in the state and more than one lakh crore rupees worth of projects are in the pipeline,he added.

The railway budget for the projects in Karnataka increased fourfold in the last 8 years.

Observing the developments in the last 8 years, the Prime Minister said that more than 3 crore houses have been built for the poor in the country,and in Karnataka,the approval for more than 8 lakh pucca houses for the poor have been given.

Thousands of middle-class families have also been supported with crores of rupees to build their houses,the Prime Minister added.

He further highlighted that under the Jal Jeevan Mission,more than 6 crore households in the country have been linked with piped water facilities in just 3 years.

The Prime Minister mentioned that under the Ayushman Bharat scheme, about 4 crore poor people of the country have received free treatment during hospitalisation.

Due to this, about 50 thousand crore rupees have been saved from being spent for the poor.More than 30 lakh patients of Karnataka have also got the benefit of Ayushman Bharat”, the Prime Minister added.

The Prime Minister said that the government is making sure that those who were forgotten due to their weak financial conditions are not neglected.

The Prime Minister further added that small farmers,small traders,fishermen,street vendors, and crores of such people have started getting the benefits of the country’s development for the first time.They are joining the mainstream of development of India”he said.

Drawing everyone’s attention towards India’s seven and a half thousand kilometres coastal line,the Prime Minister said that we have to take full advantage of this potential of the country.

I am glad that New Mangalore Port is continuously adding new facilities to boost cruise tourism.”

“Today digital payments are at a historic level and our innovations like BHIM-UPI are grabbing the attention of the world”,the Prime Minister added.

He further said that today, people of the country want fast and cheap internet with robust connectivity.

The Prime Minister underlined that today, gram panchayats are being connected by laying about 6 lakh km of optical fiber.

The facility of 5G is going to bring a new revolution in this field.I am glad that the double-engine government of Karnataka is also working to fulfil the needs and aspirations of the people at a fast pace”,he added.

Reflecting on the GDP figures that have come out a few days ago, the Prime Minister said that the policies made by India during the Corona period and the decisions taken have played a key role in the development of India.

“Last year, despite so many global disruptions, India’s exports were worth a total of $ 670 billion i.e. 50 lakh crore rupees.

The Prime Minister further added that with the efforts of the government, the country has witnessed a significant increase in coastal traffic over the years.

“Due to increased facilities and resources at different ports of the country, the coastal movement has become easier now”, he added.

“It is the effort of the government that port connectivity should be better,it should be accelerated.

Therefore, under PM Gatishakti National Master Plan, more than two hundred and fifty projects of railways and roads have been identified which will help in seamless port connectivity”, the Prime Minister remarked.

The Prime Minister threw the spotlight on the celebrations of Azadi ka Amrit Mahotsav,and remembered the struggles faced by Queen Abbakka and Queen Chennabhaira Devi in saving India’s soil from the clutches of slavery.

Today, these brave women are a great inspiration for India moving forward in the field of exports”, he added.

The Prime Minister concluded his address by referring to the Karavali region of Karnataka.He said,I always feel inspired by this energy of patriotism, of national resolve.

May this energy seen in Mangaluru continue to brighten the path of such development,with the same wish,many congratulations and best wishes to all of you for these development projects.”

Details of the projects

Prime Minister inaugurated and laid the foundation stone of mechanisation and industrialisation projects worth around Rs.3800 crores in Mangaluru.

Prime Minister inaugurated the project worth over Rs.280 crore for mechanisation of Berth No. 14 for handling containers and other cargo, undertaken by the New Mangalore Port Authority.

The mechanized terminal will increase efficiency and reduce the turnaround time, pre-berthing delay and dwell time in the Port by around 35%, thus giving a boost to the business environment.

Phase I of the project has been successfully completed, thereby adding over 4.2 MTPA to the handling capacity,which would further increase to over 6 MTPA by 2025.

Prime Minister laid the foundation stone of five projects worth around Rs 1000 crore, undertaken by the Port.

The facility will bolster Pradhan Mantri Ujjwala Yojana in the region while reinforcing the port’s status as one of the top LPG importing ports in the country.

These projects will improve the turnaround time of bitumen and edible oil vessels and reduce the overall freight cost for trade.

Prime Minister also laid the foundation stone for the development of the Fishing Harbour at Kulai, which will facilitate safe handling of fish catch and enable better prices in the global market.

This work will be undertaken under the umbrella of the Sagarmala Programme and will result in significant socio-economic benefits for the fishermen community.

The Sea Water Desalination Plant, set up at a cost of around Rs. 680 crores,will help reduce dependency on fresh water and ensure a regular supply of hydrocarbons and petrochemicals throughout the year.

Having a capacity of 30 Million Litres per Day (MLD), the Plant converts seawater into water required for the refinery processes.