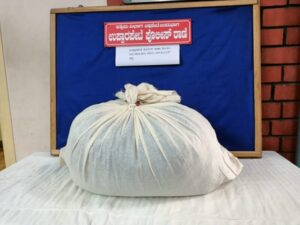 he West Division police of Upparpet police have arrested a peddler who posing as railway employee used to Smuggle marijuana from Assam.

Senior officer told reporters,the Upparpet police inspector received a credible information that some posing as railway employee or person is sourcing or procuring drugs from Assam and is carrying it to city by train to deliver to his clients.

Based on the information a team of officials kept a close watch on passengers coming from Assam,our team on suspect basis followed all movements of a person who was moving suspiciously on the platform.

The team followed his movements and when he was waiting for someone outside the railway station the police team surrounded the area and approached him and found a bag in his possession the team questioned him for whom he is waiting and what is he carrying in the bag.

On suspect basis the team intercepted the bag and found Marijuana drugs in his possession.

Based on which the team secured him and took him to Upparpet police station for further investigation.

During investigation the accused confessed the crime and during intercepting his bag the team found he had a Fake ID card of Railway employee and used to move around in AC coaches and carry drug packets concealed in secret places under the bogies on the pretext of checking the coaches and cleaning.

A detailed investigation by the team it has revealed that the accused is a resident of Hubbali and has married twice one wife used to stay in Mysuru and other in Assam.

The accused used to source drugs from Assam it is alleged that his second wife used to help him getting drugs from Assam and many times he used to get drugs through parcel in AC coaches by Impersonating as TC as checking boogies and cleaning.

Sometimes he only would travel to Assam and get the drugs packed in small packets and concealed in secret places in under AC boogies.

With his arrest the team has recovered 8.5 Kg Marijuana drugs from him and further investigation is on and we are now trying to find out his network and possibly involvement of railway staff.

Finally Bengaluru Police Commissioner,C H Pratap Reddy,has appreciated Addl CP West, Sandeep Patil,DCP West,Laxman B Nimbargi,ACP, KC Giri,PI,Vasanth,PSI,Prabhu and other officials and crime staff who has done a commendable and meticulous investigation as their excellent work and presence of mind has helped them land in jail by alert cops for the exemplary and excellent work done by them a suitable reward will be given to whole team he added.