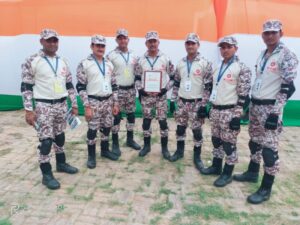 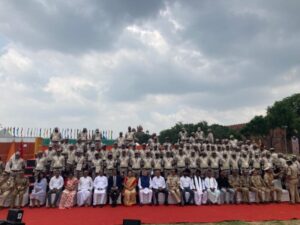 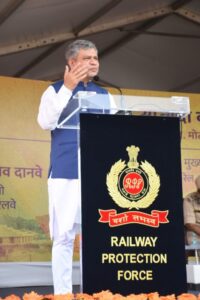 s a part of AZADI KA AMRIT MAHOTSAV celebration various events are organized across the country to remember the great sacrifices of our freedom fighters in ensuring freedom which we are enjoying today and also glorious history of cultural achievements.

This mahotsav is dedicated to the people of India who have not only being instrumental in bringing thus far in its revolutionary journey but also have shaped social, cultural, political identity.

As a part of the same, a bike rally was organized by RPF consists of 75 motor cycles and 150 bikers including 06 ladies,which arrived New Delhi from various Railway Zones on 13.08.2022.

The rally was received by Honorable MR and other dignitaries in a colourful function organized at Red Fort. In this rally, 04 bikes with 08 bikers were participated from SWR who had undertaken journey from Hubballi on 18.07.2022.

Ashwini Vaishnaw,Hon’ble Minister of Railways, Communications & Electronics and Information Technology felicitated the bikers in the function.

Martyrs of India’s Freedom fight were remembered in the function and their relatives were felicitated.

Addressing the gathering,Honourable Minister remembered the sacrifices and struggles of our freedom fighters.

Further, Honourable Minister called all railway men and people associated with railway to work hard to achieve the goal set by Prime Minster of India.

Speaking on the occasion Shri Sanjay Chander, DG/RPF informed that, during the celebration RPF organized various events over 550 districts across India in which all members of the Force were actively participated.

Apart from the above band display conducted at all important railway stations across the divisions and a Video wall depicting various services.