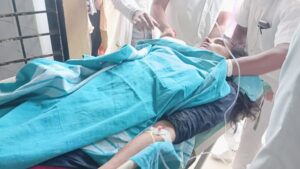 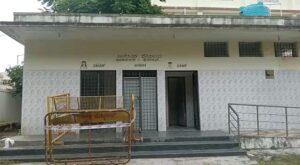 n a shocking incident, a man slit his wife’s throat in the premises of a local court in Karnataka’s Hassan district on Saturday and tried to attack his baby before bystanders intervened and saved the child, police said.

The horrifying incident took place in the premises of Holenarasipura town court.

The deceased woman has been identified as Chaitra,a resident of Thattekere village,while the her husband was identified as Shivakumar from Holenarasipura taluk.

Senior officer along with Hassan SP,Hariram Shankar with other staff rushed to the spot and cordoned off the area after collecting information he said,the couple were married seven years ago,but had filed a petition for divorce as they were not able to lead a cordial life.The couple were called to the court for compromise.

Shivakumar had assured the court that he would bury differences for the sake of his two children after the advice of the judge and advocate.

However,the accused,after agreeing to the compromise,had followed his wife to the restroom and slit her throat.

When he attempted to hurt the child she was carrying,he was restrained and the baby rescued.

Shivakumar tried to escape from the spot,but was chased and caught and then handed over to the police.

Chaitra was immediately rushed to Holenarasipura hospital and then shifted to Hassan District Hospital where she succumbed to her injuries.

Police are further investigating the matter to ascertain the reason behind this horrifying incident.