Home / City News / CM Bommai instructs handing over of pending houses within one and a half month: CM Bommai 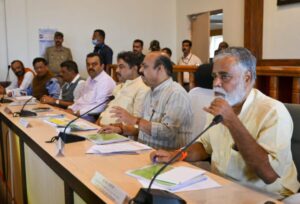 hief Minister Basavaraj Bommai has instructed the officials to complete and hand over the remaining houses,to be distributed for those who lost their houses during the floods and landslides two years ago,within the next one and a half month.

The Chief Minister addressing a media conference after holding a meeting in DC’s office in Madikeri on the flood havoc,said,195 houses being built by Infosys would also be handed over at the earliest.

About 835 houses have already been built for those affected by floods in 2018-19.Officials have been instructed to restore the power lines and transformers without any delay in the district.

Based on their report appropriate permanent rehabilitation works would be taken up.In some places houses would be retrofitted to offer better protection, Bommai said.

A team from Amrita University has conducted a study in the region and submitted a preliminary report.

The recommendations would be incorporated to minimize the damages by next monsoon season, Bommai said.

Replying to a question about assault on Hindu activists in Shivamogga,Bommai said,police officials have been instructed to take action.