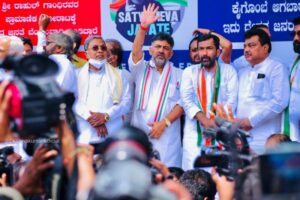 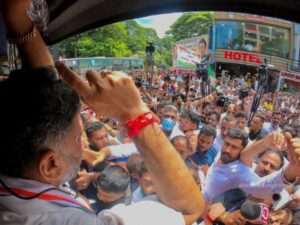 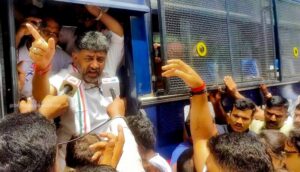 ongress leaders Siddaramaiah and DK Shivakumar among 50 party workers were detained by the police on thursday when they led the march to Raj Bhavan to lay siege to protest against the alleged harassment to party president Rahul Gandhi by ruling BJP through Enforcement Directorate .

The police made elaborate security arrangements have been made to monitor law and order to traffic movements in and around CBD area has been diverted .

As the protest commenced from KPCC office marched on queens road to enter Rajbhavan when the police stopped the protestors and detained them.

The protestors alleged that the plainclothes policemen assaulted them before bundling them into the vans which they had stationed at the Balekundri circle .

A senior police officer said that any form of protest or procession is illegal within the city limits as per the HC order and the congress party have been informed about this.

However they continue the protest and rejected the notice from the police informing about the rules .

Traffic in and around Rajbhavan was disrupted for sometime and traffic policemen were struggling to manage the traffic.