A decorated air warrior, Group Captain Varun Singh succumbed to his injuries this morning at the Air Force`s Command Hospital here, a week after he was seriously injured in the chopper crash near Coonoor in Tamil Nadu on December 8.

Chief Minister,Basavaraj Bommai has expressed his grief at the demise of Group Captain Varun Singh.

The Chief Minister in his condolence message said, “I am extremely saddened at the death of Group Captain Varun Singh.The nation has lost a brave soldier in his death.

Capt Varun Singh was seriously injured in the helicopter crash that claimed the life of Chief of Defense Staff Gen.Bipin Rawat. He was being treated at the Command Hospital in Bengaluru.

I convey my deep condolences to his family. I pray to the almighty to give strength to his family members to bear this loss. Om Shanthi.”he said in his tweet.

Death of Captain Varun Singh is a huge loss for the country, Chief Minister Basavaraj Bommai said expressing his condolence on the demise of the officer who was seriously injured in the helicopter crash that took the life of Chief of Defense Staff Gen Bipin Rawat.

Speaking to media persons he said,Capt.Varun Singh had suffered 80% burn injuries.He was provided best medical treatment, but it is sad that he has breathed his last.Mother India has lost a brave soldier in his death.

It is not just the Indian armed forces, people of the entire country are in grief. His entire family is associated with the military.I pray to the almighty to bless his soul and give the strength to his family members to bear this loss.”

Replying to a question about the charges leveled against a minister by opposition Congress members in the Legislative Council, Bommai said that he would not be appropriate to reply to issues that were raised in the house he added.

Bommai along with Governor Thaawarchand Gehlot had visited the Air Force’s Command Hospital in Bengaluru on December 9 to inquire about Singh’s health.

Initially admitted to a hospital at Wellington in the Nilgiris district in Tamil Nadu with 80 per cent burns, Singh was shifted to Bengaluru’s Command Hospital on December 9 evening, for higher treatment.

General Rawat,his wife Madhulika Rawat,and 11 other defence personnel were killed when a Mi17V5 helicopter carrying them crashed near Coonoor in Tamil Nadu on December 8.

Expressing grief over the passing away of Group Captain Varun Singh, former CM BS Yediyurappa said, “He (Singh) laid down his life in the line of duty. My condolences to his family and friends. May the brave soldier attain Sadgati. Om Shanti.”

PRO Defence Bengaluru said,HQ Training Command IAF informed  that Mortal remains of Group Capt Varun Singh will move from Command Hospital tomorrow at 10.00 AM to Air Force station Yelahanka. From Yelahanka by service aircraft to Bhopal. Wreaths will be laid at AFS yelahanka.

Group Captain Varun Singh’s mortal remains are planned to be airlifted to Bhopal tomorrow. Expected time of arrival at Bhopal is 3 pm. The funeral is planned on the following day, 17 December 21, at Bhopal.they said in their statement. 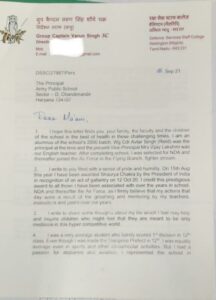 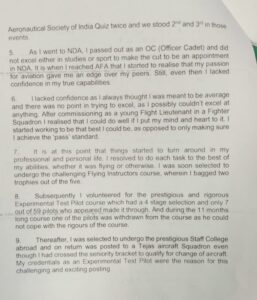 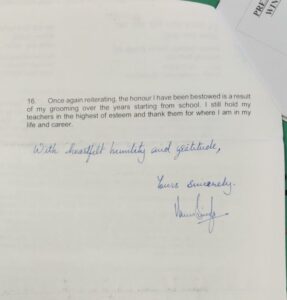 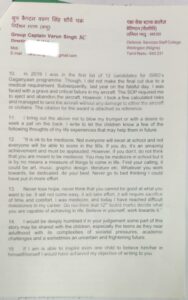 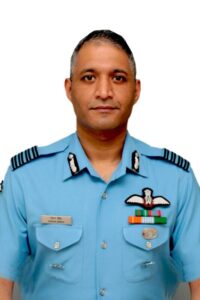 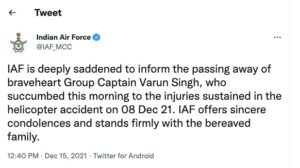 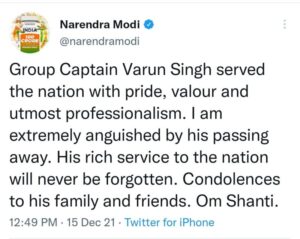 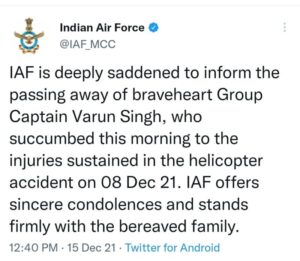