Union Home Minister, Shri Amit Shah today began a tree saplings plantation program at nine different places in Ahmedabad by planting a tree sapling at Sindhu Bhavan Road in the city, in Gandhinagar Lok Sabha constituency. Speaking on the occasion, Shri Amit Shah said the tree saplings plantation program is small in scale but its impact and magnitude are so wide that it provides healthy and long life to many generations to come. If trees are not taken care of, the very existence of the Earth will be in danger.

Shri Amit Shah said Shri Narendra Modi has done the work of protecting the environment by providing LPG cylinders to 14 crore people in the country. Along with this, the Modi government has distributed a large number of electricity-saving bulbs.

Shri Amit Shah said if we take care of the environment, then the environment will take care of us – Shri Narendra Modi has imparted the lessons of this ancient Indian culture through his actions, policies and his hard work. In our Upanishads also, trees have been glorified at many places.

Shri Amit Shah called for making Ahmedabad acity with the highest green cover, not only in India but in the world and said that this is possible. Shri Shah said 5,000 trees were destroyed in the city due to the recent cyclone, and against this background the city administration has increased the tree plantation target from 10 lakh to 15 lakh. Shri Shah said efforts should be made to plant trees which can provide oxygen for three to four generations. 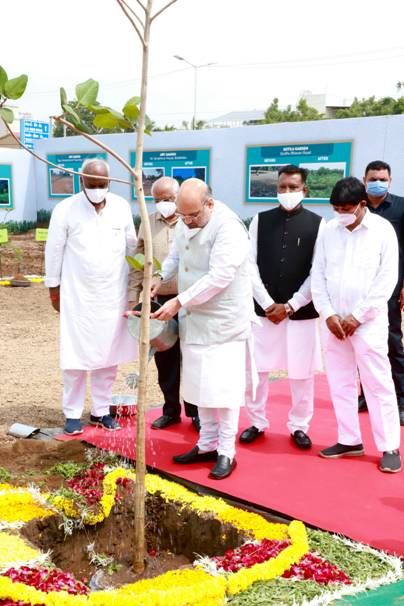 Shri Amit Shah spoke about planting trees such as peepal, banyan, neem, jamun along with reducing damage caused to the ozone level by carbon dioxide and carbon monoxide. Describing the benefits of medicinal properties of trees, Shri Shah said that in Gandhinagar Lok Sabha constituency, it has been resolved to keep more than 11 lakh trees alive, for which all workers and citizens will have to work.

Shri Amit Shah said India is facing many issues along with the whole world during the COVID-19 pandemic. Many people have lost their loved ones. Under the leadership of Shri Narendra Modi, a campaign of free vaccination has been started for all citizens above 18 years of age across the country, and urged everyone should be vaccinated. Shri Shah called on all citizens to resolve that wherever every person is living, arrangements should be made for all to take the vaccine.

The Mayor of Ahmedabad, the Chairman of the Ahmedabad Municipal Corporation Standing Committee, the City President and other dignitaries were present at the tree saplings plantation program.