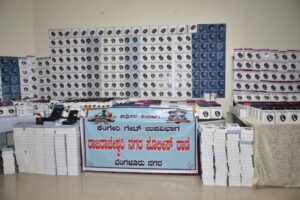 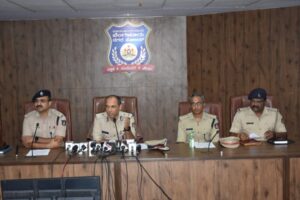 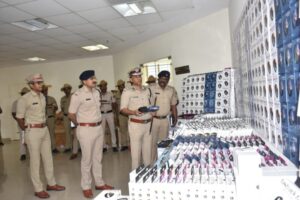 he Rajarajeshwarinagar police on Tuesday busted a gang which had looted wrist watches consignment worth Rs.57 lakhs.

The accused has been identified as Zameer Ahmed,28 and his associate Syed Shahid,26.

Senior officer told reporters the two accused who owned grocery shop along with others confronted a goods vehicle carrying 23 boxes of branded wrist watches worth Rs.57 lakh from Kolar to RR Nagar.

The accused waylaid the vehicle accusing the driver of knocking down one of them and beat up the driver and his assistant black and blue.

To save themselves the driver and his assistant ran away following which the accused took the goods vehicle and sped away.The accused later abandoned the vehicle after taking away 23 boxes.

Based on the complaint,the RR Nagar police track down the accused through the CCTV footage and other technology skills and recovered the valuables.

The accused were searching for the customers to sell the watches in bulk before they are arrested and further investigation is on.

Finally Bengaluru Police Commissioner,CH Pratap Reddy has appreciated Addl CP West,Sandeep Patil, DCP West,Laxman B Nimbargi,ACP,Bharath S Reddy,PI,M Shivanna,PSIs,as,Krishnamurthy K,Adarsh,and crime staff as,Naveen Kumar,Santhosh, Chidanand Manturu,Gururaj Patil,Honnappa Aagasanmati,Dundaiah Hiremath,Sharath,Ravindra,Ramesh,Sharan Basappa and others has been appreciated for the exemplary and excellent work done by them in tracking the duo and recovering the stolen wrist watches from them a suitable reward will be given to whole team he added.