Abhijit Ray, Kolkata:The greatest player of all time Lionel Messi lift the FIFA World Cup Football 2022 trophy at Qatar and the iconic football moment that will stay forever in the history of World Cup. Argentina bashed the overcoming France on penalties and dedicated the trophy to Maradona, the God of Football. Not even in extra time, the  ever greatest  FIFA 2022World Cup football final match ended in a tiebreaker. The Latin American football giant, Argentina won the 2022 World Cup by winning the tiebreaker by 4-2. France’s Mbappe scored a hat-trick in the World Cup final but remained a tragic hero like this time. Argentina won the trophy after 36 years after defeating France in a tiebreaker. Messi’s  wish to lift the World Cup is now finally fulfilled and he has  f reached his target.  His last World Cup was memorable for Argentina.Lionel Messi, the “GOAT” became the first player to score in every knockout match of a World Cup. He scored against Australia in the ‘Round of 16’, the Netherlands in the quarterfinals, Croatia in the semi-finals and France in the final. It can be said that the first half was a one-sided game for Argentina. Lionel Messi and Angel Di Maria gave Argentina a 2-0 lead and the France could not get close to the goal. In the second half, the game turned after 70 minutes once De Maria was being taken back by Argentine coach. KylianMbappe woke up France with two goals in 90 seconds. As the match ended 2-2, the match was decided on penalties.Lionel Messi scored again in the 109th minute of extra time. Team Messi leads the match. However, in the 118th minute, Mbappe scored again in the match. KylianMbappe became only the second footballer after Geoff Hurst to score a hat-trick in the World Cup final. But in the end, Argentina won 4-2 on penalties. Argentina goalkeeper Emiliano Martínez was in excellent form in the penalty shootout. Martinez saved Aurelian Chaumeny and Kingsley Coman’s penalty.After winning the FIFA World Cup 2022, the godfather of world football, Lionel Messi withdrawn his decision of not to play any more International game . The 35-year-old Argentine superstar hassaid that he wants to shine the light on international football for his countless fans. Messi announcedthis  on the day of the Qatar World Cup final, kiss the much-desired trophy or let it remain elusive, the World Cup final is going to be his last match in the Argentina jersey. But he is not retiring now. India’s Buenos Aires, Kolkata had celebrated wildly their most favorite Leo Messi’s glorious achievement. Jubilant supporters burst crackers and made rounds of their localities in their favourite team’s blue and white colours with Argentina’s national flag fluttering from their hands. Mostly all the areas of Kolkata and other parts of Bengal were awash in blue and white flags. Kolkata roars for Argentina, dedicated Argentina’s  greatest victory to the Argentine Football God Maradona. In the end, the hopes and dreams of Messi and all of Argentina eventually turned into reality at a rocking Lusail Stadium. 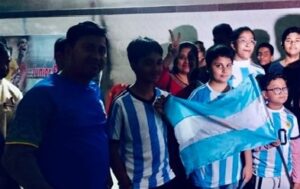