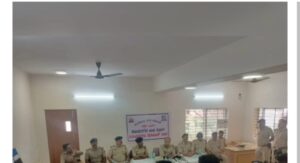 The police recovered valuables worth Rs.6.5 lakh and detected 10 HBT cases he had committed .

Senior officer told reporters,The accused Manjunath Murthy,was arrested by police in a similar case in 2020 and remanded to judicial custody.

After coming out on bail he started selling sweet corn on push cart but this is only to identify his target,a police officer, said .

Based on a house break theft case reported,a team headed by Raju MS,Inspector of Magadi road police station began investigation and recovered footage of around 50 CCTVs,situated in and around the scene of crime and identify the accused .

The police picked up the accused and they grilled him who confessed to the crime.The accused said that he would pawn the stolen valuables and spend money on the medical expenses of his parents and rest of the money he would spend it on his vices .

The police are further checking his criminal background to ascertain his network.

Finally Bengaluru Police Commissioner,CH Pratap Reddy has appreciated Addl CP West,Sandeep Patil,DCP West,Laxman B Nimbargi,ACP,P Ravi,PI, Raju MS,and his whole staff for their excellent work in nabbing the notorious habitual offender and a suitable reward will be given to whole team he added.