During the middle of the 18th century, Samser Gazi attacked and captured Udaipur. It was mentioned in Gazi’s biography that the Muslim ruler himself had offered puja to Devi Tripura Sundari, according to the website of the temple run by the state government.

Vice President Jagdeep Dhankhar on Tuesday offered puja at the 700-year-old Tripureswari temple, one of the 51 Shakti Peethas, at Udaipur in Tripura’s Gomati district. Accompanied by his wife Sudesh Dhankhar, the Vice President went to Udaipur from the state capital Agartala in an IAF chopper and paid obeisance to Goddess Tripureswari at the temple founded by Maharaja Dhanya Manikya in 1501. 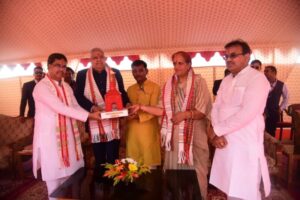 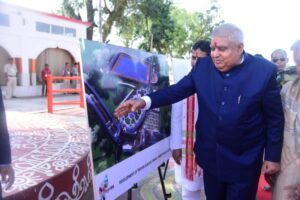 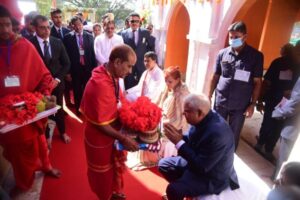 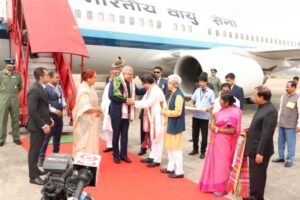 “It is gratifying to know that all over the country, wherever religious places are there, a new well deserved, well thought out look is being imparted,” the Vice President told reporters. Dhankhar said that this “unique” Tripureswari temple is also getting developed and he looked forward to coming back to it again.

They spent over 30 minutes at the temple of Goddess Tripurasweri, also known as Tripura Sundari, where people of any religion can offer Puja. During the middle of the 18th century, Samser Gazi attacked and captured Udaipur. It was mentioned in Gazi’s biography that the Muslim ruler himself had offered puja to Devi Tripura Sundari, according to the website of the temple run by the state government. In presence of State Tourism Minister Pranajit Singha Roy, Local MLA Biplab Kumar Ghosh & other chief administration official workers.

From Udaipur, the Vice President left for Agartala where he will address a seminar at MBB College. Chief Minister Dr Manik Saha will also be there. Earlier, state Governor Satyadev Narayan Arya and Saha welcomed Dhankhar at Maharaja Bir Vikram Airport in Agartala on his arrival.

“I am happy to welcome the Honorable Vice President of India Jagdeep Dhankar Ji and his wife Smt. Sudesh Dhankar at Maharaja Bir Vikram Airport in Agartala. I think their visit to the state will be a source of great pride for the people of Tripura,” the chief minister said in a social media post. From Agartala, Dhankhar is scheduled to leave for Kolkata later in the day.

President Jagdeep Dhankhar is scheduled to visit Tripura and West Bengal on Tuesday, his first trip to these states after assuming the second highest constitutional post in the country, officials said.
He will reach Tripura first and go to West Bengal later.

After arriving at Agartala, the capital of Tripura, Dhankhar will leave for Udaipur in Gomati district by an IAF chopper to offer prayer at the Maa Tripureswari temple.

Later, he will attend a seminar at MBB College in Agartala. Chief Minister Manik Saha is scheduled to be present at the event.

The Vice President will then leave the state for Kolkata.
Dhankhar, a former West Bengal governor, is slated to arrive at the Kolkata airport in the afternoon and head straight to the famous Kali temple at Kalighat to offer puja. He will later go to a place in Salt Lake near here for a private visit, the official said.

Before becoming the Vice President, Dhankhar was the governor of West Bengal. During his three-year tenure at Raj Bhavan here, he had frequent run-ins with the Mamata Banerjee government on issues like law and order, post-poll violence, appointment of vice-chancellors of state universities, signing of bills passed by the assembly and his tweets criticising the state administration.