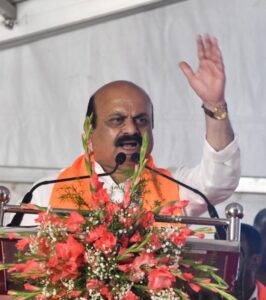 hief Minister Basavaraj Bommai ruled out any dissatisfaction in BJP.

Talking to reporters at Murugha Mutt helipad here on Wednesday,he said Agriculture Minister and District-in-Charge Minister B.C.Patil has undergone knee surgery and is recuperating in hospital because of which he was unable to participate in today’s function.

Asked about giving 10,000 litre of water to each house,the CM said the government did not have any such proposal.

Bommai refused to comment when asked about former CM H.D.Kumaraswamy’s statement of making a Muslim as the chief minister if the Janata Dal (Secular) gets majority in the 2023 Assembly polls, and said it was the JDS decision and he did not have anything to say about it.

Bommai said a report submitted by deputy commissioner of Chitradurga regarding the Murugha Mutt is with the law Department and a decision will be taken soon.

Reacting to the arrest of former MLA and the charges of conspiracy against the seer of Murugha Mutt to fix him in a case,he said the case is pending before court and the police are doing investigation.