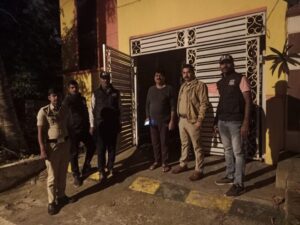 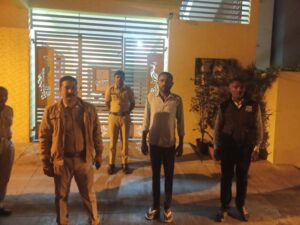 he Basavanagudi police on Wednesday arrested a 21-year-old fugitive rowdy-sheeter who had come to visit the temple during Basavanagudi Kadalekai Parishe.

The accused Pratvik,resident of Hosakerehalli having several criminal pending and the court has issued four warrants against him.

The accused was arrested in 2019 for attempting to murder his rival and was remanded to judicial custody. However he obtain bail and few months later and on the run since then.

On Wednesday,the Basavanagudi police based on a definite clue waited for him near the temple in mufti and pinned him down before he could entered the temple.

The accused was taken into custody for further investigations to ascertain his activities while he was off the radar.

Meanwhile CCB officials conducted a special drive against rowdies and detained as many as 86 anti social elements to check their background and criminal antecedents in the wake up upcoming elections .

Several teams formed led by five ACPs and 20 Inspectors carried simultaneous raids on the houses of the rowdy elements across the city and detained them for questioning.

While some of the rowdies escaped before the raid, the police in some cases recovered lethal weapons from their houses .

The police questioned about their activities,and financial status and recorded their statements and warned them to stay away from anti social activities or any election related campaigns .