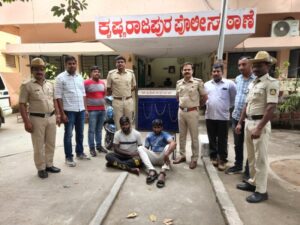 he KR Puram police on Thursday arrested two habitual offenders and recovered stolen valuables worth Rs.6,2 lakh from them.

The accused Rafiq Khan,27,from Govindapura and his associate Vinay Venkataramanappa,20, from Kolar were involved in four criminal cases including a robbery, two house breaks and a bike theft cases reported in and around whitefield division.

The accused were arrested when they were moving suspiciously In Ayappa Nagar to recce the locked house in a stolen bike.

The police patrolling team intercepted them and a detailed questioning led them to confess to the crime.

Based on their confession the police recovered the stolen valuables from a gold shop where the accused had pawned to get money for his vices.