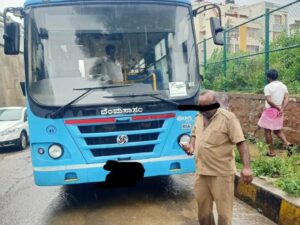 The deceased was identified as 55-year-old Santoshi,a school teacher.

The bus driver Thimmayya R ,41 has been arrested abd bus seized.Bus was heading from Kengunte to Vidyaranyapura

The kamakshipalya traffic police rushed to the spot and shifted the body and cleared the traffic.Traffic was disrupted for sometime.

Senior officer said,Santoshi used to teach at a government school in Bengaluru’s Hosakerehalli.

“She was crossing the road to go home.Santoshi has two kids,it was her daily routine.But the accident took place due to the carelessness of the BMTC driver,he said.

The bus driver Thimmayya,45, is currently in the custody of the police.The body of the deceased was later moved to Victoria Hospital in the city for autopsy and further investigation is on.