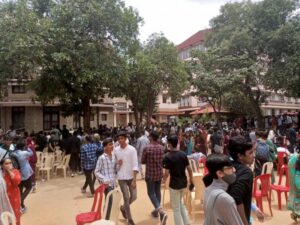 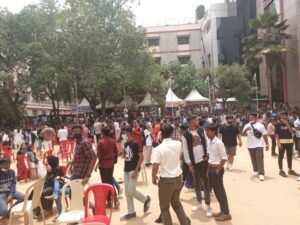 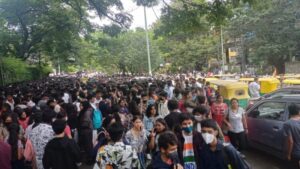 Management of the mount carmel college and the principal in the dock for organizing an event without prior permission and causing chaos on palace road on August 15.

Senior officer told reporters our High grounds police received a information that people are shouting and have parked the vehicles in an hapzard way obstructing others.

The High grounds police had to struggle for over 3 hours to contain the crowd and clear the traffic before filing a complaint.

Based on the complaint filed by Sachin HP,Police sub inspector,of high grounds police have registered an FIR charging the management and the principal under wrongful restrain,causes danger,obstruction or injury to any person in any public way and public nuisance .

The police have issued notice to the accused to appear before the police for questioning.

Mr.Sachin in his complaint said that the college management has organized the event meant for around 500 people but sold the tickets to over 5,000 people.

The tickets were given to the students to sell and those who purchased the tickets unable to get into the venue were stopped at the gate by the security created ruckus and chocked the traffic on palace road.

The police rushed to the spot and dispersed the crowed gathered on the road chocking the traffic movement .

It is alleged that some outsiders as Eve teasers teased girl students by cutting their hairs even some students were locked in rooms as there was huge crowd of more than 8000 people gathered then the police later entered inside the college and canned few miscreants who were creating Chaos by Eve teasing students and with this they cleared the crowd inside the venue,a police officer,said we have not received such complaint regarding Eve teasing and Harrasment to girl students said a senior officer.

The college management failed to inform about the program and the approximate number of invitees,which could have helped to provide security cover and organize the event in a better manner,a senior officer,said.