The Magadi road traffic police caught a 29-year-old data entry operator who was riding his scooter with fake number plate and violating traffic rules unabated for the last four years .

Due to his bad road behaviour the traffic police would slap fine against the owner of the bike whose number plate the accused was using . Though the owner of the vehicle Badriprasad paid a total sum of Rs.1 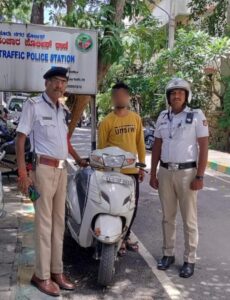 1,000 towards fine for the violations he has not committed,he had also raised a complaint with the traffic management centre,about the misuse of his registration number and challenge the violations .

The cheating came to light when PSI Nanjegowda with Constables as,Mahesh Kamble,Anand Thakkannavar and Harish reached Cholurpalya 6th cross based on a complaint about abandoned scooter on road side.

Based on the information,the police traced the accused Ramgopal immediately the cops secured him and took to station for further questioning.

The team grilled him which led him to confessed to the police that he was hoodwinking the traffic police for the last four years.

Further investigation revealed that he had filed a vehicle theft complaint with the city market police in 2016 and even claimed the insurance.

Two years later he got back his vehicle but neither informed the police nor the insurance company.

Without informing anyone he started using the same by faking a number plate of same model, colour vehicle and plying on the road and also committed violations with impunity,Kuldeep Kumar R Jain,DCP, traffic,West division,told reporters .

Based on his confession,the police seized his bike and also filed a cheating and forgery case against him with KP Agrahara police.

The accused was handed over to the police for further investigations and remanded to 14 days Judicial custody.