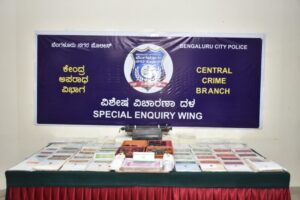 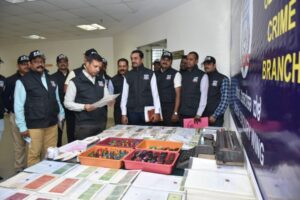 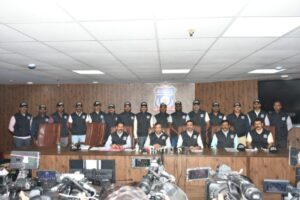 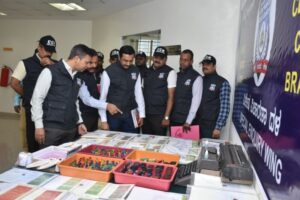 he special Enquiry Wing of Central Crime Branch on Friday busted a fake stamp paper racket and arrested a gang of 11 persons who are operating from the typing pool of Kandaya Bhavan,situated close to Deputy Commissioner’s office .

Joint Commissioner of Police,Crime, Raman Gupta told reporters our DCP,Crime-1,received a credible information about the fake Stamp Papers being sold in shops in kandaya Bhavan.

Based on a tip off,a team of police led by DCP,Dr SD.Sharanappa,and his team raided the shop and arrested a person,recovered 2664 fake stamp papers some of them dated back to Mysore Maharaja period and stampers,computers, printers and seals total worth Rs.5.11 lakh.

During the raid The team have also seized fake stamp papers of old dates from 1990,1995,2002 and 2009 with fake GPA details to claim the ownership of the properties in and around Bengaluru.

The accused would prepare the stamp papers of old dates and sell it to the land grabbers who want to file civil suite to claim the ownership of the property and later clinch a deal with the genuine landlords through out of court settlements.

The accused would sell the stamp papers to the price depending upon the value of the property and the dates.

These fake stamp papers prepared by the accused are being used in various government offices to cheat and claim benefits,since for the last few years.

The accused even have network of stamp paper vendors at taluk office in and around the city to run their racket .

The accuse have been taken into custody and investigations are on to ascertain their network and beneficiaries of the accused.

Finally Bengaluru Police Commissioner,C H Pratap Reddy has appreciated Joint CP Crime,Raman Gupta,DCP Crime-1,Dr SD Sharanappa,and his team as,ACPs,as,TV Suresh and other officers and staff has been appreciated for the exemplary work done by them in nabbing 11 Member gang who was selling Fake Stamp Papers to make easy money and become Rich in shortcut is landed in Jail and a suitable reward will be given to whole team he added.