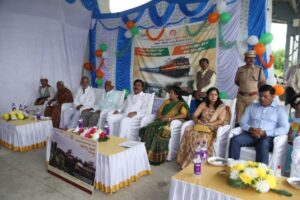 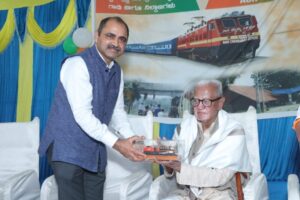 he closing function of the Iconic Week of “Azadi ki Rail Gadi Aur Stations was organized today (23.07.2022) at Maddur and Vidurashwatha Stations of Bengaluru Division.

The closing event of the central function was held in Delhi and 75 stations selected as “Azadi Ki Stations”were connected through Video Conference with the Central Location at Delhi for Live Telecast of the function.

Maddur and vidurashwatha were “Azadi Ki Stations”selected from Bengaluru Division.

Shyam Singh briefed about the purpose of organizing Iconic Week.shri.Chandu expressed his happiness about ‘Azadi ka Amrit Mahotsav. He also shared his feelings regarding his participation in freedom struggle.

In Vidurashwatha,N.H.Shivashankara Reddy,MLA vidurashwatha was present in the function.He called upon people to come together irrespective of caste, creed and religion and work for the welfare of the nation.

The guests shared their experiences during the times freedom struggle they witnessed as family members of freedom fighters.

Children of Kasturaba Gandhi Government School presented patriotic songs and cultural programmes.Staff of Railway enacted a skit on the theme of national movement and national unity.