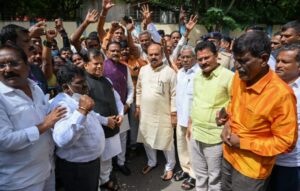 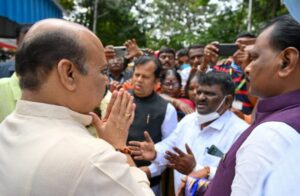 he recruitment(regularisation) of Pourakarmikas is a historic decision.No other state in the country has done it,Chief Minister Basavaraj Bommai said.

Speaking to media persons Bommai said,the Pourakarmikas have welcomed the government’s decision wholeheartedly and they have resumed their duty.

A committee would be constituted for special recruitment of Pourakarmikas.The committee will have labour leaders,president of the Corporation, officers of the Law department as its members.

The services of the Pourakarmikas would be regularised and they would be entitled to other benefits as well which they were demanding.The Pourakarmikas have expressed their happiness, Bommai said.

The Pourakarmikas are working under very pathetic conditions.Realising their plight I had announced Rs.2000 monthly hardship allowance for them in the budget.

However they were demanding a regularisation of their services for a long time.Their demand has been fulfilled.The process of regularisation has started, Bommai said.

Replying to a question about heavy rains lashing various districts,Bommai said,the Disaster Management teams have been alerted,the district in-charge secretaries have been instructed to go to the trouble spots.

Many houses have been damaged due to coastal erosion.Officials have been instructed to assess the damage and pay compensation.

The Deputy Commissioners of the affected districts have been asked to make all arrangements to help the affected people.