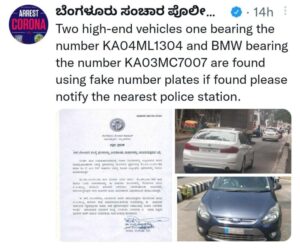 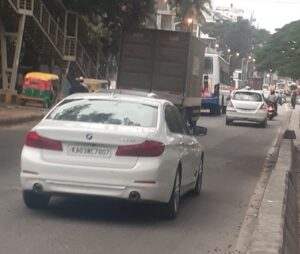 he traffic police are on the lookout for two high-end cars including a Tayota and a BMW which are playing in the city with fake registration number plates .

The incident came to light when a senior police officer on Tuesday noticed the car zoom passed him in a rash and negligent manner .

The officer chased the car and managed to take the picture and send it to the TMC seeking necessary action.

The officer approached the owner of the car through the registration number and found that he owned Omni car and not the BMW.

Suspecting something fishy,Joint Commissioner of Police,Dr BR Ravikanthe Gowda,issued directions to the traffic policemen on grounds to look for the two cars which according to him could be a stolen vehicle or involved in some offence .

The traffic police have also asked the public to alert the police or the control room if they find the cars.