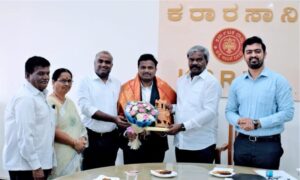 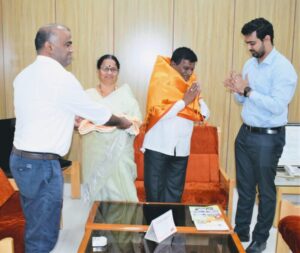 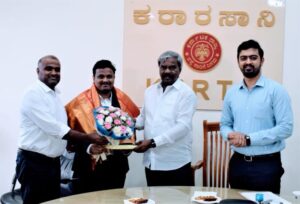 ay be a driver,Conductor or Mechanic but always been a dream that his/her Son or Daughter would become a Doctor or an Engineer or an IAS. Mr.Anurag Dharu son of KSRTC driver who embodies this dream.

On his achievement Mr.Anurag was honored today at KSRTC Central Offices along with his Parents.

On this occasion Mr.M.Chandrappa,MLA and Chairman,KSRTC who facilitated Mr Anurag Dharu,while honouring said Our drivers are working day and night and running buses round the clock.

It is indeed commendable and exemplary on parents that they are able to educate their children reaching their top academic honor’s and achievement.

Many congratulations to his father Manik Rao and mother Kashibai.Mr. Anurag should be the voice of the downtrodden of the society while serving the nation.

He also said,Managing Director of KSRTC, Anbukumar is an example of discipline and sincerity reaching his office at 9 am and earnestly beginning his duties.Such officers are a role model for society.

Mr.Anbukkumar IAS,Managing Director, During the occasion also said that Indian Administrative Service (IAS) is a dream for many, but it requires a penance,discipline,diligence hard work and learning.

The achievement made by our driver’s son is a pride and an honor to our organization.

Further, he asked Mr Anurag to work for the society and recalled his father’s role in his achievement.

He profusely thanked Mr Manik Rao and his role while his son achieving the top honors. He also said that he is extremely happy to know that many of Corporation drivers, Conductors and mechanics childrens are studying in engineering, medical studies, in IIT,MS,IIM,Navy and many elite Institutes.