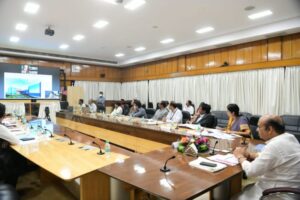 The officials of the union and state government explained the proposed programmes he is scheduled to inaugurate during his visit to the state.

Bommai,who addressed the state government officials after the video conference,instructed them to take precautions to ensure that there is no scope for any lapses in the programmes to be attended by the Prime Minister.

The Prime Minister is set to participate in the International Yoga Day celebrations on June 21 in Mysuru.

The Chief Minister instructed the officials on preparations for the mega event.