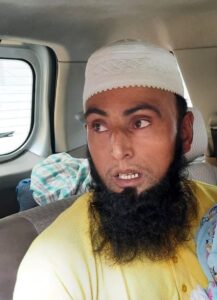 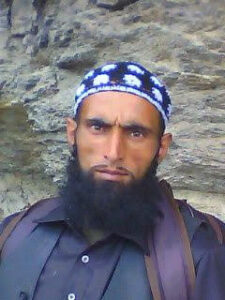 The accused has been identified as,Talib Hussain@Tareek a resident of Jammu and Kashmir.

The accused was living with his family and working as labourer for many days and even had Aadhar card when he was arrested.

A self styled commander of terror outfit Hizbul Mujahideen,Tailb was wanted in connection with the targeted killing of Hindus in the Union Territory of Jammu and Kashmir.

Senior officer said,a secret and meticulous investigation and operation Talib was handled very secretly and without any hint to the accused a team of Jammu and Kashmir police who were tracking the movements of the HM Commander from Kashmir.

As soon as the information was received a special team of Jammu and Kashmir police immediately swung into action and the team conducted a combing operation in and around his whereabouts.

The team of officials took a room in Gandhinagar area and conducted a secret search operation after getting confirmation about his whereabouts in Srirampuram area the special team of cops pressed into action and where moving around the area and when they identified the suspect the team passed information to their seniors.

PI,Balakrishna deployed four cops with the Jammu and Kashmir police to secure him a joint operation was carried the team was stationed near his place as he came out the cops surrounded him and zeroed in on him.

The Accused used to stay in the premises of Srirampuram masjid and the police team were very clever and said the Mosque authorities that his second wife has approached the court and filled a Haebis Corpus against so we have come to take him and produce before the court.

The team detained him and took to station after taking him to station the accused got to know that he was arrested for his terror activities and he was most wanted criminal.

The team kept him whole night in the station and in the morning they took him to Jammu and Kashmir without any clue to the locals that he was a terrorist and was wanted from past 6 years.

The special cops played a vital role in nabbing the Hizbul Mujahideen Commander as arresting. A person from mosque is like risking their life and others life but a meticulous investigation and a plan to arrest has given a big success to whole team.

The accused used to cook food and do other cleaning works of mosque and was given shelter without any rent and used to use fake simcard in the name of Mohsin said a senior officer.

A team of Jammu and Kashmir Police and 17 Rashtriya Rifles launched a Joint operation and nabbed Talib Hussain, who was hiding in Bengaluru.Jammu and Kashmir,DGP,Dilbag Singh have said that so far 47 terror modules have been busted in the Valley.

According to the reports,the terrorist Talib Hussain,who was arrested on May 29th, is a resident of Rashagwari in Nagseni tehsil of the Kishtwar district of Jammu.

He joined Hizbul Mujahideen in 2016,Talib is the only terrorist who survived for the most number of days even after being on the hit list of the security forces.

Talib Gurjar belongs to the local Gurjar tribe here, who are well aware of the mountains here.He is the father of five children.In the upper reaches of Marwah and Dachan in Kishtwar,he has been seen roaming with weapons several times.

Many times his family members sought help from the police to bring him into the mainstream, but it did not have any effect.

Talking to the media,DGP Dilbag Singh termed Talib’s arrest as a “big success” and said that due to this,terrorists were active in Rajouri and Poonch.

He said that in the last five months,47 terror modules have been neutralised in the Valley.The terrorists involved in the targeted killing have been identified and are now being nabbed.

Meanwhile,it is learnt that security forces have gunned down Hizbul Mujahideen terror commander Nisar Khande during an encounter with militants in the Anantnag district.

The city police and the Internal security division officials are now coordinating with the J&K counterparts to find out more details about Talib’s activities and his contacts during his stay here .

Police will keep an eye on the movement of suspects and state police will extend all possible help.