– Pioneering at-home testing start-up, Healthians launches the ‘Health on Wheels.’ Healthians has also announced to Set up a free breast cancer screening camp for Women in Police in Gurugram.

8th May 2022, Gurgaon, This Mothers day, Healthians – a technology-driven diagnostics start-up, launched Health on Wheels with a vision of ‘Har Jan Swasth’, making it easier for millions of Indians to get tested and stay healthy. Healthains has also announced to set up a free breast cancer screening camp for ‘women in police in gurugram’ as a gesture of thanks from society. The ‘Health on Wheels’ was inaugurated by Gurgaon Commissioner of Police, Ms. Kala Ramachandran at Healthians’ head office on 8th May – Mothers day.
Currently trusted and patronised by over 2.6 million households in the country, Healthians is poised for a quantum leap as it seeks to further expand its services with the ‘Health on Wheels’. At present, the ‘Health on Wheels’ will be available in Delhi NCR & by Dec 2022, the service will also be operational in several other cities such as Mumbai & Bangalore with a vision to cover remote areas where the health screening is easily not accessible by all.
With this ambitious plan, the Healthians founder and CEO, Deepak Sahni, has a vision of adding 10 healthy years to every Indian’s life by providing accurate, affordable, and hassle-free preventive diagnostic services anytime, anywhere. “Making India, and eventually the world, Healthier is what we are working for; with the ‘Health on Wheels’, we believe that we are getting a step closer to our dream,” he says. 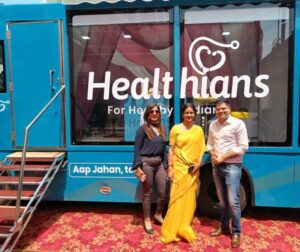 Healthians, India’s leading diagnostic services provider, is credited with pioneering the health test at home concept almost 8 years back. The brand also has been instrumental in changing the behaviour of consumers to adopt a preventive approach to health rather than a reactive one. And now, Healthians is yet again on the path to disrupting the market with Health on Wheels, which will make getting tested a lot easier for millions of Indians. “When you ask people about a vehicle associated with healthcare, an ambulance is something that comes to everyone’s mind. We aim to add another healthcare vehicle to people’s consciousness – Health on Wheels- symbolic of a proactive approach to health rather than a reactive one,” Sahni further added.
Past month, Healthians became the first diagnostic brand to ever advertise on IPL through an ad campaign that consists of a series of Ad Films based on the widespread reach and convenience of booking a health test with Healthians, encapsulated by the line – ‘Aap Jahan Test Wahan’.
Over the years, Healthians has built a strong foundation of being a health-tech company by integrating technology into every aspect of its business. So that consumers are offered the maximum convenience at every stage of their interaction with the brand. And now, with an almost ubiquitous reach across the length and breadth of the country, with the largest fleet of highly skilled phlebotomists (almost 2000+) who specialise in sample collection from any location, coupled with more than 20 of its own network of state-of-the-art laboratories, Healthians wants to make no compromise in terms of providing a superior service experience to its customers.