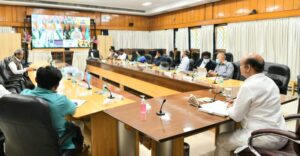 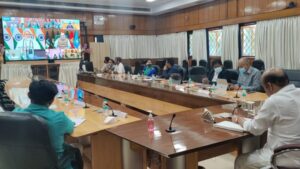 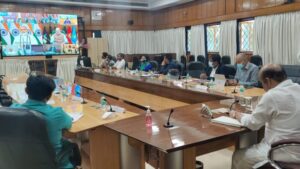 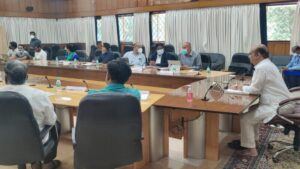 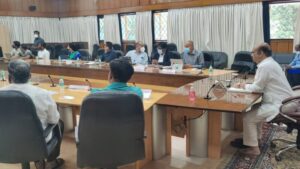 es under the able leadership of the Prime Minister.

* Passengers arriving from South Africa, Thailand, Indonesia, Russia, China, Australia, South Korea would be subjected to testing and we will start tracking too.

* State has 10 Genome Sequencing Labs. So far 8890 tests have been conducted, of which 4449 were identified as Omicron cases.

*Treatement facilities are available at government and private hospitals, 1.43 lakh Oxygen beds have been made available.

*Already Covid guidelines of compulsory wearing a mask, social distancing has been implemented.

*Guiidelines issued by the Union government in this regard is being followed.

*Karnataka is in the forefront of the vaccination campaign with 98% of the eligible population covered.

*About 50 lakh doses have been administered to those in the 15-18 age group.

*About 27% of the population have taken Precautionary Vaccine.

*Presently the State has a stock of 61 lakh doses.

*Intese public awareness campaign has been launched through the various media platforms on Covid control.

*Checking is being increased at State’s borders.

*State is utilising the Rs831 cr grant provided for Covid Management and works are in progress.

*State has about 1220 metric tons of Oxygen stock. Of the 243 Oxygen units sanctioned, 242 have been completed.

*Measures would be taken to manage the pandemic without any curbs on economic activities.

*State is fully geared up to tackle the possible 4th wave of the Covid pandemic.

Following Prime Minister Narendra Modi’s instructions, a vaccination campaign for 6 to 12 year old kids would be launched in schools.

The vaccination campaign would be intensified with increasing the Precautionary Vaccination for those in the 15 to 18 age group and those who are 60 years and above,Chief Minister Basavaraj Bommai said.

The Chief Minister was speaking to media persons after an interaction with the Prime Minister through Video Conference on Covid Situation.

“The Covid situation in the state was explained to the Prime Minister at today’s meeting.Presently the pandemic is under control.

Testing is being increased as the cases are on the rise since April 9.We are thinking about setting a daily target of 30,000 tests.

Random testing would be done on 2% of the international travellers,tele tracking would be implemented.

Passengers from 8 countries would be tracked,” Bommai said.

Over 50,000 beds have been arranged in government hospitals.Over 1 lakh beds are available in private hospitals.We have adequate stock of Oxygen.We are prepared to tackle the Covid challenge, Bommai said.

Apart from the vaccination campaign, tracking, tracing and treatment should be followed.People should mask themselves and follow social distancing.

Medical infrastructure would be raised in district hospitals and medical colleges, he said.

Safety audits would be conducted in major hospitals.The Covid 3rd wave was controlled through a massive vaccination drive.

The economic activities too should go on along with precautionary measures.People should adhere to the Covid guidelines.This is the lesson we have learnt from the past 3 waves,Bommai said.

Replying to a question about possible Covid control measures in the State, Bommai said, “testing would be increased at all the hospitals, positive cases would be subjected to Genome Sequencing.It has been decided to raise the Oxygen production capacity to 1100 metric tons.”