The Central division police of Ashoknagar police on Tuesday arrested a couple who were stealing batteries installed at the traffic signal lights in and around the city.

With the arrest of the accused Sikandar, 30 and Najma,29 the police cracked 68 battery theft cases reported in and around the city and recovered 230 batteries worth Rs 20 lakh from them.

The accused has been identified as, Sikandar,30,Najma,29.and a receiver Dhanashekar.

A high level meeting was called by commissioner of police Kamal Pant,Addl CP,West,Sandeep Patil,DCP,Central MN Anucheth with ACPs,PI,and crime staff were part of the meeting.

Commissioner of police, Kamal Pant after collecting stock of the complaints instructed to form a special team and nab the culprits based on instructions a special team was formed under the supervision of DCP,MN Anucheth,a team led by ACP,Cubbon park,Rajendra DS,team headed by PI, Ashoknagar,Mallesh S Bolletin and his team swung into action.

The team visited the crime spots at various locations and analysed CCTV cameras more than 500 CCTV camera footage were analysed by the team the team got some clues that the culprits are two persons including a women and would operate between 3 am to 5 am in all Divisions and after commiting theft the couple would move towards Goraguntepalya area.

After getting clues a special team was stationed near Goraguntepalya signal to keep a watch on N-torque bike.

The team took the help of RTO and N-torque company and verified nearly 4000 vehicles registered and around 500 vehicle numbers were verified in and around Goraguntepalya to nab the couple.

The police team kept a close watch on the route and caught the one person and took into custody after getting clear identity in one of CCTV footage the team grilled who spilled the beans and arrested a women who was part of the crime on the same day only both couples were arrested.

During investigation the accused confessed to the crime and it was revealed that the accused hailed from Chikkaballapura used to move around the city on the pretext of selling ready made garments on the scooter but also keep a watch the traffic signals to steal batteries in the wee hours between 3 am to 5 am .

Besides covering their faces the accused would disconnect the tail lamp of the scooter to avoid number plate being recorded in the CCTV .

Based on their confession the police team arrested Dhanashekar 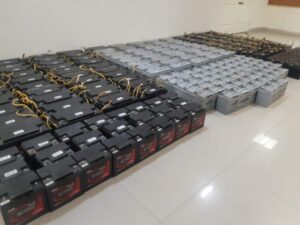 ,owner of a junk shop who was buying the stolen batteries from the accused the team grilled all the trio and recovered 230 stolen batteries and solved 68 cases with their arrest and further investigation is on.

Finally Bengaluru police commissioner,Kamal Pant has appreciated Addl CP West,Sandeep Patil,DCP,Central,MN Anucheth,ACP,Rajendra DS,PI,MS Bolletin,PSI,as,D L Srinivas,and crime staff as,Hariprasad,BR Devaraj,Jahangir, Shivakumar,Bhimrao Desai,Shivakumar Swamy,Basappa Darregound,Basavaraj Hosakoti,and others has been appreciated for their exemplary work and excellent investigation skills used in nabbing the notorious couple who used to steal traffic signal batteries to lead lavish are now cooling their heels in jail a reward of Rs.60,000 with appreciation letter will be given to the team he added.