A shopping mall gutted due to accidental fire broke out at the ground floor of south india mall in the wee hours of Saturday.

Patrolling police who was on duty noticed the fire at around 3 am and alerted fire control room.

Six fire tenders rushed to the spot and after three hours of operation put out the fire.

Though the security guards were at the mall they are safe and no casualties have been reported since the mall was closed.

Senior Fire official said,A storage area in South India shopping mall was gutted in an accidental fire which broke out due to suspected electric short circuit at Arakere gate on Bannerghatta road on Saturday.

Seven fire tenders with a team of 30 fire and emergency service personnel reached the spot within five minutes and put out the fire after six hours of operation.

Goods and furniture worth several lakhs gutted, no one injured in the mishap as the shop was shut down its operation due to weekend lock down enforcement.

Fire was noticed at the storage room at the basement area belonging to Reliance Company. 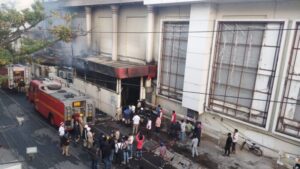 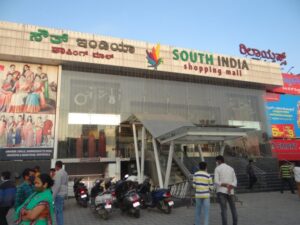 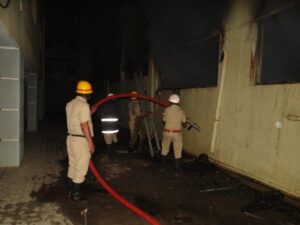 Except two security guards,no one was present inside the building.The fire was contained in time before it damaged the remaining portion of the building, he said .

Initial probe revealed that electrical short circuit could be the reason behind the mishap, however a team of expert visited the spot and inspecting to ascertain the exact cause of the fire.