The West Division police of Jnanabharathi police have arrested a habitual house break thief and recovered stolen valuables worth Rs.20 lakh from him.

The accused has been identified as Syed Ahmed, 38.

Senior officer told reporters,Based on a complaint filed by the house owner in Jnanabharathi police station,the police stepped up patrolling and managed to zero in on the accused who was moving suspiciously near a jewels shop to sell the stolen property the team questioned him and were not convinced to his Statement and took apprehended him for further questioning.

A detailed investigation by the team the accused Ahmed,a native of Kolar revealed that he used to move around the city to identify the locked houses.

He would then knock the door and ring the bells repeatedly to confirm whether anyone inside the house.

The team grilled and based on his statement the team has recovered,407 grams of gold ornaments,2.5 kg silver articles,and a two wheeler used in crime has been recovered stolen property Worth Rs.20 lakhs from him and with the arrest of the habitual HBT offender we have cracked 12 cases reported in and around city.

The accused has been booked under house break thefts and remanded to judicial custody and further investigation is on he added.

Finally Bengaluru Police Commissioner,Kamal Pant has appreciated Addl CP West,Soumendhu Mukherjee,DCP West,Dr Sanjeev M Patil,ACP Kodandarama,PI,Lakshman Nayak and his crime team has been appreciated for the exemplary and commendable job done by them in nabbing the notorious HBT offender and recovering the stolen property a suitable reward will be given to the whole team he added. 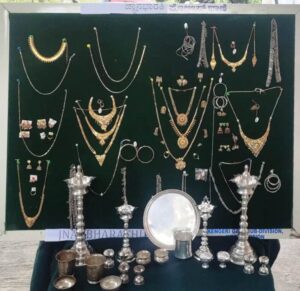