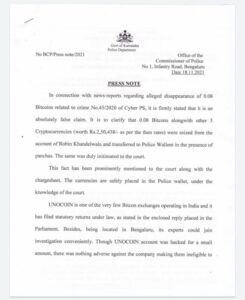 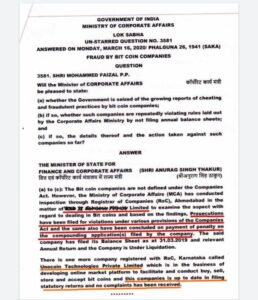 Kamal Pant on Thursday said that the issue about the alleged disappearance of the 0.08 bitcoins is false and it is in the safe place of the police wallet,under the knowledge of the court.

Clarifying on the issue,Mr.Pant said that the 0.08 bitcoins with three crypto currencies total value of Rs 2.5 lakh (as per the then rates) were seized from Robin Khandelwal and transferred to police wallet in the presence of Panchas and the same has been duly intimated to the court and mentioned in the charge sheet .

It may be recalled that the CCB investigations in January this year found Kolkata based bitcoin trader Robin Khandelwal helped Srikrishna in his dealings.Police said Srikrishna was into Hawala trade and converted Indian currency to bitcoins.

Referring about the unocoin company wrongly depicted in the media,he said that it is one of the very few bitcoin exchanges operating in India and it has filed statutory returns under the law.

Being Based in the city though an unocoin account was hacked for a small amount,there was nothing adverse against the company, making them ineligible to assist in the investigations .

The company is a victim in this case and not an accused,Mr.Pant reiterated and hence it is not at all a case of conflict of interest he added.