The West Division police of RR nagar police have cracked the clueless murder case and arrested two accused one is a goods van driver and his brother who abducted 21 year old hotel management student and killed him brutally in order to extort money from deceased father.

The accused has been identified as,Tajamul 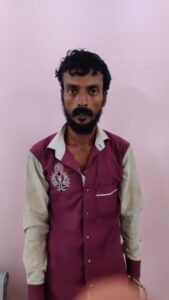 pasha,39 and his brother Syed Nasir,26 residents of JJ nagar and All India Human Rights President of Goripalya Ward and were employees with deceased father Mani,a fruit vendor from Bharati Nagar.

Senior officer told reporters,a youth body was found near Rajakaluve in RR Nagar police station limits the body was found in gunny bag,later in the evening the team identified the deceased as Tarun.

Meanwhile Mani who had filed a missing complaint later informed the police about the ransom call.

Tarun, a 21 year old hotel management student who went out to buy crackers on Nov 1,found murdered in rajakaluve in RR Nagar on November 2.His hands and legs tied and mouth tapped with adhesive tape.His body stuffed in plastic bag his mouth was gagged and tied with adhesive tape.

A team led by DCP,West,Dr Sanjeev M Patil, supervising the investigation a team of officers under the leadership of ACP, Kengeri Sub-Division,Kodandarama,PI,Shivanna and his crime team swung into action.

The team after analysing CCTV footage and other technical inputs and based on the information,the police track down the duo near satellite bus stand minutes before they were trying to flee the city .

The team took the duo into custody and interrogated them in their own style which led them to confess the crime and the duo revealed that they had asked a loan of Rs.1.5 lakh from Mani for which Mani refused.

As per the plan, the accused took Tarun, 21 to their sister house on the pretext of getting him crackers on cheaper rates on November 1.

They locked Tarun in a terrace room at their sister’s house in Arakere and gagged his mouth with tape to stop him from screaming.

However tarun died due to asphixiation following which the accused dumped his body in a storm water drain in RR nagar before calling Mani for ransom of Rs 50 lakh.

The duo had quit the job three months ago and since then hatched a plan to kidnap Tarun for ransom and make quick money .

There are other accused involved in the crime and abetted the accused,efforts are on to track them down,and a detailed investigation will be done on how the accused got a post a president of Goripalya Ward by All India Human Rights organization and with this did he extort money or blackmailed people we are investigating it said a senior officer part of the investigation.

Finally Bengaluru Police Commissioner,Kamal Pant has appreciated Addl CP West,Soumendhu Mukherjee,DCP West,Dr Sanjeev M Patil,ACP, Kodandarama,PI,Shivanna and his whole team who has done a exemplary work in cracking the clueless murder case and arrested the duo and a suitable reward will be given to the team he added.