A 21-year-old woman and her one year old son were killed and the husband injured when a speeding tipper knocked down the motorcycle they were riding on Marathahalli outer ring road on Monday.

The deceased have been identified as Sridevi and her son Dakshith.The injured Shivakumar is being treated at the private hospital .

Senior officer told reporters,Shivakumar,a private firm employee and resident of KR Puram was heading to Dharmapuri on his motorcycle to visit his native.

While they reached the outer ring road of Udupi park hotel,the tipper drove in rash and negligent manner and knocked down the bike.

Shivakumar lost balance and fell on the left side of the road while Sridevi who was holding Dakshit slipped,and came under the wheels and crashed .

The driver of the truck abandoned the vehicles and escaped .The HAL Traffic police have taken up a hit and run case against the driver and seized the vehicle for further investigations he added. 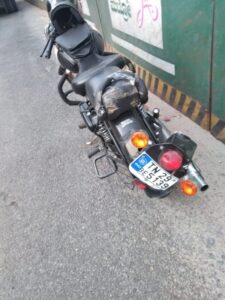