A furniture manufacturing unit situated in timber layout on mysore road gutted in fire due to accidental fire in wee hours of Sunday.

According to the police,the fire was spotted by few residents at around 2 am at lakshmi enterprises and alerted fire control room.

Four tenders rushed to the spot and after three hours of operation put out the fire.

Though furnitures and raw materials and the building gutted no one injured in the mishap,a police officer,said.

Fire and emergency service personnel suspect that the fire is due to electric short circuit. However team of FSL and electrical inspectorate is probing to ascertain cause of the mishap.

The value of the loss is yet to be ascertained. 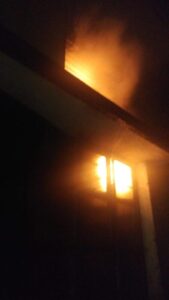 The Byatarayanapura police are investigating.