During the workshop, he interacted with more than 250 Tribal research scholars, from different universities of Odisha, Jharkhand, Chhattisgarh, and West Bengal.  The scholars also  presented their papers.  The students and their guides had interactive session with officers of the Ministry.

Tribal Talent Pool initiative of MoTA aims at the development of the Tribal scholars by providing an environment of learning, support, contribution, and recognitionand to enable them to participate in various research and evaluation activities undertaken by MoTA at Central and State levels. Speaking on the occasion, Shri Bishweswar Tudu  said that the Adivasi community has potential and multiple talents, not only in the field of research but they are also good in sports, art and crafts. He also mentioned that motivation and encouragement is required among the scholars, awareness should be on the forefront. He stated that the Tribal Talent Pool   conclave will encourage the tribal talents with the proper guidance by various   research institutes and these kinds of programs should be encouraged and should be of longer duration.  He said that Ministry, State Government, NGOs, Universities have to work together on “Azadi ka Amrit Mahotsav” for achieving significant improvement in human development, and education plays an important role.

Shri. Anil Kumar Jha, Secretary, Ministry of Tribal Affairs said, the Ministry has a mandate and playsa central role for theTribal development in the country.  “National Tribal Talent Pool Conclave is an important initiative of the Ministry which aims to provide National Platform for the Tribal research Scholars. He mentioned that tribal talent needs to be showcased collectively on

one platform. Tribal scholars can further contribute in the policy formation at both Centre and state level, public and private sector and also contribute for the community at large. Conclaves/workshops like this will encourage these tribal scholars to be proactive with their research work. He congratulated this effort of all the partners and  suggested that collaboration is a basic key to knowledge enhancement and networking of scholars  is important ,working in the similar research topic 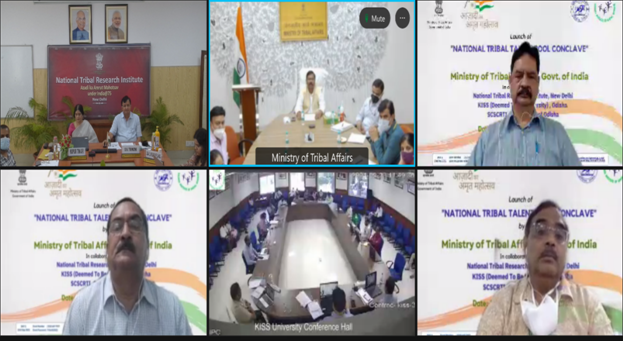 Shri S.N Tripathi, DG, IIPA said “We want this Tribal Talent Pool to carry their work forward in the guidance and become a force or a think-tank of the ministry to help in conservation of tribal community.”. He also said that this as an opportunity for all of those Tribal Scholars, who are passionately engaged in tribal studies to interact, utilize, share, and exchange information with one another and with the community.

Dr. Navaljit Kapoor, Joint Secretary, Ministry of Tribal Affairs focused   on three main objectives:  One was to provide timely scholarships to the tribal scholars, for which an online portal has been developed, which is connected with Digi Locker in which every student applies online. He also mentioned that earlier it used to take 2 years for the scholarship to be given, and now due to the online process, it has made the procedure very fast. Further, he emphasized that the ministry has conducted eight programs in relation to the tribal talent pool, and through this, we get an insight into their challenges and aspirations going forward. He stressed upon the fact that research scholars have qualifications, however they lack employability. Tribal scholars can come forward, and showcase their talents

Prof. Deepak Kumar Behera, Vice-Chancellor, KISS, Odisha mentioned that “today is a special day for tribal research scholars to develop a network to enhance their research work, and find correct literature, data analysis, improve communication skills, and it will further be a good networking opportunity for them. Most of them are not aware of how to link relevant data with relevant concepts and theory and workshops like these will encourage them to bridge these gaps. He also emphasized that future workshops by NTRI , can be held more frequently.

Shri A.B Ota, Director, SCSTRI, Odisha made his remarks during the inaugural address that the tribal talent pool initiative is an important step towards bringing the ST scholars together. He also mentioned research methodology, and how statistical tools can be utilized for quantifying the data, plagiarism (check) and how further studies need to be conducted. The difficulties highlighted by the research scholars in this conclave will help us in identifying the gap areas which will further support us for better capacity-building.

Dr. Nupur Tiwary,Special Director, National Tribal Research Institute and coordinator of this program informed that IIPA has conducted seven workshops in the last 1 year, physically and also through a virtual medium.NTRI is also creating an alumni base for future assistance and research fellows are keenly participating in various programs.

The Tribal Talent Pool Conclave was also attended by heads of various Centre of Excellence (CoEs) and Tribal Research Institutes (TRIs), from various parts of the country.