Two policemen sustained injuries when a highway patrol vehicle they were travelling turned turtle after a speeding vehicle collided with it near Devanahalli on Saturday.

Due to the impact the patrolling vehicle turned turtle and the two policemen including the driver struck inside the car upside down.

Passers-by rushed to their help,pulled them out and took them to the hospital,while the car driver which collided with the police vehicle escaped leaving behind the car fearing public backlash.

The Vijayapura police rushed to the spot and with the help of the public put the car back on its wheels.Traffic was disrupted for sometime and the police managed to ease the traffic after some time.

Senior officer said, the patrolling vehicle was trying to take a U turn near saibaba temple in Avathi village when the car coming from the opposite direction in a rash and negligent manner lost control and collided with the police vehicle . 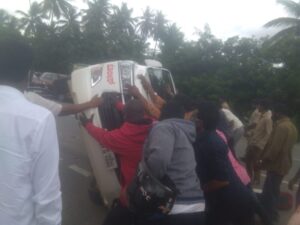 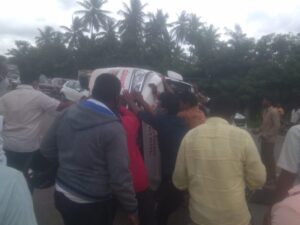 ra police have taken up a case of rash and negligent driving against the driver and efforts are on to track him down he added.