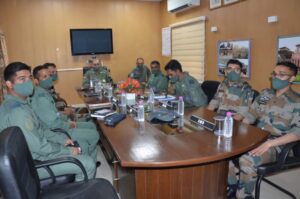 During the visit, the Air Marshal inspected the operational installations and appreciated the role played by the Station personnel. He urged the air warriors to continue discharging their duties with utmost sincerity and ensure a high sense of operational readiness. He also inaugurated an open gym facility in the Station and emphasized on better stress management in life.

Mrs Nirmala Ghotia reviewed the performance of various welfare activities and interacted with the Sanginis of the Station and praised their contribution towards the Association.