Jagdish Mukhi is the Governor of Assam and a member of BJP and RSS.Past positions have included Lieutenant Governor of Andaman and Nicobar Islands,Minister of Finance, Planning,Excise and Taxation and Higher Education in the Delhi government.

Jagdish Mukhi is a veteran BJP leader from Delhi credited with working extensively for the welfare of citizens of Delhi. He is a former minister of Finance, Planning, Excise and Taxation and Higher Education in the Delhi government.

He won best MLA award twice in Delhi Vidhan Sabha. He was also honoured as the best planning minister of the nation. Jagdish assumed office as the 12th Lieutenant governor of Andaman and Nicobar islands in August 2016.

Dr.Vipin Gaur,General Secretary of NAI,recently had a fruitful discussion and meeting with the his excellency at Raj Bhavan of Assam he said, I had a Wonderfull Meeting with Governor of Assam H.E.Jagdish Mukhi ji we discussed many topic about Journalists welfare and positive Journalism he was so impressed with NAI Activities and works we have done in the field of journalism and after 6 years I met H.E.Jagdish Mukhi ji it inspired me as his same style of heartless response made my heart happy he is doing very good work in assam to develop Assam state in collaboration with state government.

I am very much inspired by the Governor of Assam who has given time to us in his busy schedule to discuss about various topics he was very happy to know about our organizations activities and works we are doing for the welfare of journalists across nation he added. NAI State President Monojit Singha , General Secretary Yebni and State Coordinator Saidur Rehman presents Memento to H.E 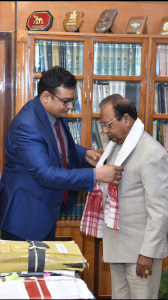